A Short Hike to Svartifoss 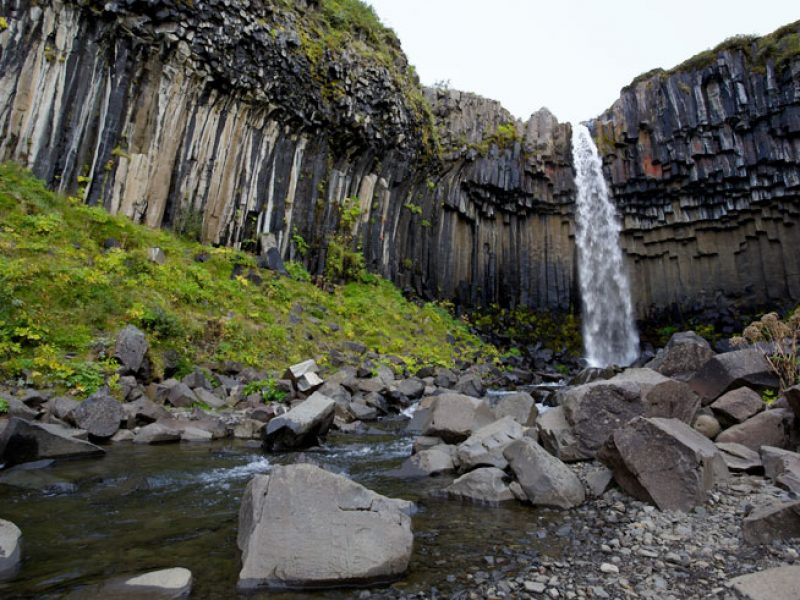 We were driving Iceland’s south coast in May last year, and although the ever-changing scenery out the window was beautiful, on arrival at Skaftafell National Park, it was nice to jump out, stretch the legs and do a little hike.

The information centre had lots of information on the area and hiking routes open and distance. Our choice was to go and see Svartifoss, a waterfall surrounding by black basalt columns which give it its name. You are almost spoilt for choice with waterfalls along the ring road, and even though Svartifoss is very photogenic, it’s often overlooked as it is a little off the beaten track.

The hike itself took about 40 minutes from where we’d parked the car. It wasn’t hard or strenuous, with a very gradual incline so you don’t notice really the ascent or the effort getting to that height. The trail is very picturesque and has a couple of look out points along the way. Hundafoss is one of these stops and, whilst not quite as impressive as Svartifoss itself, is another great photo opportunity.

After about half an hour you get a glimpse of the waterfall in the distance and the area slowly changes in the lead up from a ‘normal’ canyon to these thick, regularly shaped black columns surrounding the waterfall.

It is spectacular! The National Park have done a great job of putting a small bridge close by the falls so you can get more photos from a different angle. It also serves to also divert people to continue off on a different path to see some more hidden treasures. I won’t spoil these for you though – you’ll have to visit for yourself. All in all, well worth the roadside stop.

Discover it for yourself

All our self drive holidays in Iceland include iDiscover, an innovative online travel guide accessed on an iPad Air that comes on loan with your hire car. Find out more about what iDiscover can bring to your holiday here.

The Top Things To Do In East Iceland

From spectacular hikes and coastal drives to waterfalls, volcanoes and wildlife, East Iceland is becoming a magnet to travellers in search of a quieter, less visited side of the country. We recommend eight of the best things to do in this beautiful and diverse region, easily accessible from the town of Egilsstadir.

My Superjeep Adventure in Thorsmork

One of our Nordic Travel Specialists, Jack, travelled to Thorsmork in South Iceland, for a thrilling Superjeep Adventure.