Half way around Antarctica 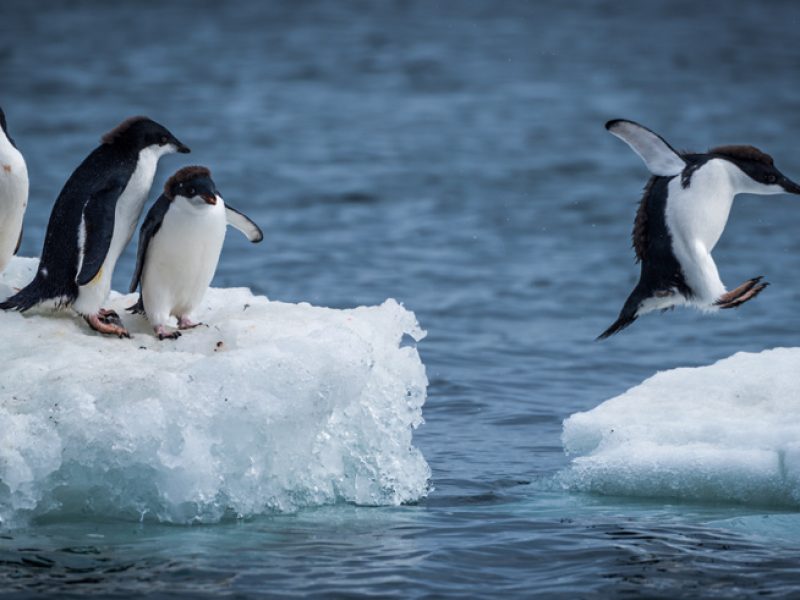 After travelling to the Arctic, clients Steve Ransome and Diane Watling decided to explore Antarctica, and what an epic voyage it was…

Having been to Svalbard/Spitsbergen (78° N, due north of the Norwegian mainland) in the Arctic a few years ago my wife Diane and I were keen to visit the Antarctic. Most trips there are on boats sailing south from Chile/Argentina or Australia/New Zealand with many sea days and not much time on land. The larger cruise ships with upwards of 500 people on board do trips to this last pristine wilderness on the planet, but as there are so many passengers it is not always possible to do shore excursions. It seemed pointless to us going to the ends of the earth and not getting close to the fabulous wildlife and natural beauty on offer.

We found a trip last Christmas that will probably never be repeated due to stricter anti-pollution laws coming into force, but which fulfilled all our requirements. The ‘Kapitan Khlebnikov’ is a working Finnish built and Russian crewed icebreaker which normally sails the frozen oceans as an escort ship guiding less able boats through thick sea ice. For the past few years she has been used as an expedition vessel for adventure tour operators such as Quark. She is comfortable and fast but not a “typical” cruise ship – functionality, safety and environmental impact are more important than dressing up for dinner!

The trip we chose was called ‘Epic Antarctica’ and the itinerary was to board the ship in Port Stanley, Falkland Islands, sail due south to the Antarctic Peninsular via the South Sandwich Isles and then go all the way along the Phantom coast and Ross ice shelf until reaching the Ross sea where we would spend some time visiting research stations, wildlife and historic huts. We would visit MacQuarie Island before finally disembarking in Hobart Tasmania 30 days and 7000+ km later.

We left London at the end of Nov 2010 only a couple of days before the really bad winter started in the UK and arrived for a stopover in Chile a few days early. As there is only one flight per week to Mount Pleasant from Santiago, we certainly did not want to miss it!

After three days sightseeing we left Santiago and flew down to Punta Arenas two hours away. This was a fantastic flight which allowed us the most superb view over the Torres Del Paine national park. The tall peaks are spectacular. This area of South America, being right at the tip of the continent, is renowned for high winds and passengers did experience a bit of a battering. It did not get any better eventually arriving at Mount Pleasant in the Falkland Isles in a strong cross wind that left the sea looking very frothy indeed (the other runway at right angles which would have been better for landing was being dug up).

We were supposed to immediately embark on the ship moored in Port Stanley harbour but the high wind put a stop to that, so with 107 passengers sheltering in the tourist information office and all the hotel rooms full, the tour guides initiated ‘Plan B’ and rang the locals to ask if they could put us up for the night. We stayed with a lovely couple and ended up drinking tea, eating cakes and checking e-mails with them until late. The following morning the wind had died down somewhat and after another short delay as the two anchors had become entangled we finally set sail for Antarctica.

We then spent a couple of days sailing across the Drake Passage (known for demanding the ‘Drake tax’, i.e. giving sailors extreme seasickness), then through thick ice and amongst icebergs that towered above our ship (the ship had ten decks above sea level). It was incredible to find ourselves quite often sailing between huge ‘bergs’ 50m tall, but best not to think about the fact that the other 90% of the ice was directly under the ship! The scenery was both dramatic and stunning. The quality of the atmosphere and light was a photographer’s dream.

We visited several research stations – Palmer Station (US), Mc Murdo (US) and Scott Base (NZ) and were greeted by researchers glad to see a few different faces. Our ship also delivered essential items to these areas. At Palmer station, we were told they only see a ship once every few months so it was quite an occasion when one did appear.

Life wasn’t all plain sailing as we tried to find our way through the ice to the phantom coast – the icebreaker having numerous attempts at breaking its way through the fast ice. Luckily we did not get stuck, but the ship has done in previous years. Ice breakers can’t have stabilisers as they would get damaged in the ice, so, if the wind gets up while away from land the boat starts rocking ±30 degrees making life very uncomfortable. The worst areas for this are the Drake Passage and the entire Southern Ocean.

Being well inside the Antarctic Circle (67°S) in December means the sun never sets – we had about three weeks of continuous daylight. We were regularly changing clocks as we had to lose ten hours in time zone changes in just over three weeks of cruising. Going over the dateline, we went straight from 18th to 20th December. The two passengers whose birthdays were on the 19th really felt let down, but we all made it up to them with birthday cakes and celebrations.

It was strangely quiet and peaceful at Shackleton’s and Scott’s historic huts from around 1900-1910 – we had arrived in heated icebreakers with GPS, email and helicopters in good “summer weather” i.e. above -2C, whereas the explorers had to live out the winter in constant darkness, 100mph winds and -40C temperatures with no hope of rescue if something went wrong. We got to see inside the darkroom in some of the huts (glass plates then – no digital!) and the smell of the developing chemicals was still strong despite not having been used for over 100 years. Sadly, to prevent further deterioration of these historic monuments, visitors are only allowed to enter for just a few minutes each. The environment is so dry, even condensation from breathing can have a detrimental effect. It seems very strange to be told that a place covered in so much snow is arid. But, its unique location only realises approx 20 inches of water in the form of snow to fall annually around the peninsular. The South Pole being so much higher has far less, just two inches annually. The 3km thick ice at the pole has therefore accumulated over many thousands of years.

Image – partly dissected 100+ year old penguin and notes in Scott’s hut left as they were when the men set off to the pole. The smell from darkroom chemicals was strong in the air

It seemed very strange to visit New Zealand’s Scott base where the chef was scraping snow off the barbecue to cook for someone’s birthday celebration. The smell of frying onions was unbearable to endure. Many of us would have killed for a burger at that point!

With the boat parked in the Ross sea ice we could see steam and smoke from Mt. Erebus which is an active volcano – the nearby McMurdo research station had live CCTV of the bubbling magma pool. We were so lucky to have ‘parked’ in the ice here for two days. The weather was fantastic and in the morning we pulled back the blackout curtains to gaze out at Shackleton’s hut in the distance. A few minutes trip in the helicopter and we were at Cape Evans where Scott’s hut is located. The historic huts are being renovated by volunteers. We chatted to one man who was working there as a carpenter for four months over the summer.

The captain of our ship always invited some of the volunteers aboard for lunch. As I am sure you can imagine, fresh fruit and vegetables were in short supply. During our stay here we were lucky enough to see in the distance the launching of a research weather balloon and a Galaxy air freight plane landing on the distant Pegasus ice runway.

Christmas Day was spent at Cape Adare on the ice surrounded by very inquisitive Adelie penguins, all 250,000 of them. If you sit still, they will come right up to investigate. We had been informed that we were never to get closer than 5m to the wildlife. However, no one told the wildlife that! They were just as interested in us as we were in them. We visited many penguin rookeries (gentoo, king, emperor, adelie and rock hopper). Many colonies were home to more than one species – the tall and contemplative emperors (they spend the day just staring at each other or their own stomachs) surrounded by the shorter and hyperactive adelies put us in mind of parents and children in a school playground. Some of the penguins scrambled 400m up cliffs to their nesting sites.

Christmas Day was also Polar Plunge day. Yes, 20+ mad people donned swimsuits and jumped in to swim with the penguins. Sadly for them, as soon as they jumped in, the penguins jumped out. It would have been even more fun if the minke whale returned that had been spotted earlier in the morning using our ‘swim pool area’ as a breathing hole.

Sailing back to Hobart we stopped at Macquarie Island (a Tasmanian dependency) to see king, rock hopper and royal penguins surrounded by sleeping elephant seals. The light mantled albatross also nests here, such a majestic bird.

We’d love to go back to the Antarctic but it’s probably a once in a lifetime experience for us and this trip probably won’t be repeated. We feel so lucky to have seen at least five species of penguin, five species of seals, three species of whales, numerous sea birds and the last pristine wilderness on this planet. We also made many new friends from around the world.

There are many larger ships that visit, but for us the whole point was to go ashore to “meet the wildlife” in their natural habitat. South Georgia and some of the peri-Antarctic islands near South Island New Zealand are apparently worth seeing according to others on our trip.

If, like Steve and Diane, you’d love to get up close to the wildlife of the Antarctica on an epic voyage of exploration, browse our collection of Antarctica holidays or contact our team of Travel Specialists to find a trip suitable for you.

Please note, the Epic Antarctica voyage is no longer available.