Living the dream in Antarctica 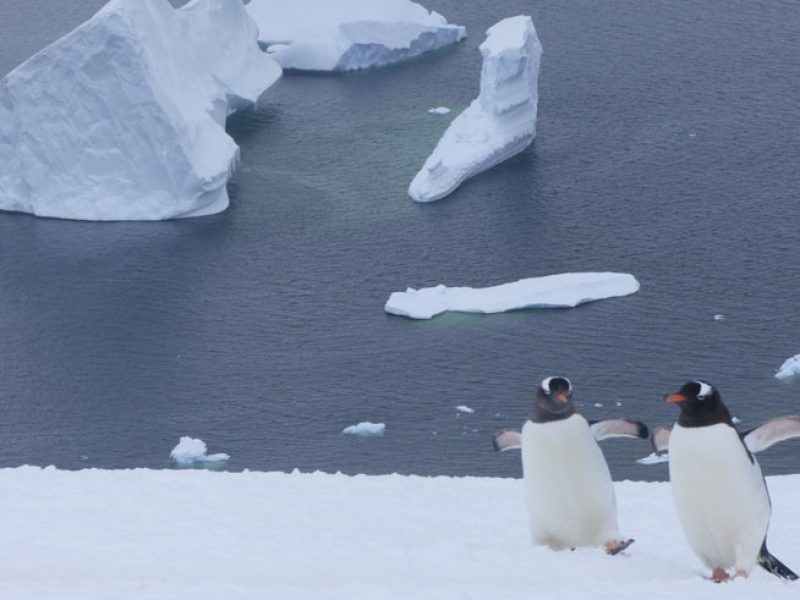 Some people dream of sun, sea and sand. Others drift off to thoughts of climbing the highest peaks, diving to the deepest depths or immersing themselves in the contrasts and charms of other cultures. I, however, have always had a curious and continuous fascination with penguins. So when I had the opportunity to see hundreds, if not thousands, of the comical waddlers in the astonishing setting of Antarctica on a voyage with Quark, I was as wide eyed and excited as a young boy on Christmas Eve.

My excitement and huge sense of anticipation had been mildly blunted by tales of the Drake Passage, the stretch of water which separates the southern tip of South America from the northern point of the Antarctic Peninsula. Its legendary turbulence was the primary subject of much of the ice-breaking chatter around the dinner tables as we pulled away from the port of Ushuaia beneath dark, foreboding clouds. In the end we need not have feared. Our ship, the ‘Ocean Diamond’, was slightly larger and quicker than most other ships which sail the southern seas.

She sliced easily through the waves, making life on board seem almost sedate considering the tempest raging outside. During the crossing, the enthusiastic crew gave an extensive series of enlightening and informative lectures, which left us feeling energised and well-educated about the world we were about to experience.

Though Shane, our superb expedition leader, described the crossing as being “on the rough side of normal,” most of us survived unscathed. There were an unlucky few who were less fortunate but even they emerged from their cabins after a bit of rest with a glint in their eyes, raring to go. So with the Drake conquered, we were finally ready for some Antarctic action.

All wrapped up in our bright yellow parka jackets and our snug waterproof wellies (both provided by Quark*), the loading of the zodiacs began shortly after lunch on day three. Within two minutes of leaving the ship our driver, Alex, had spotted a fin. A large school of humpback whales then swam around us for 30 exhilarating minutes, sparking a plethora of camera clicks with every flick of their majestic tails. After a further hour of cruising amongst enormous, pristine icebergs, it was our turn to head for shore and have our first encounter with the real stars of the show: penguins.

As I set foot on land for the first time in days, I could see a multitude of nesting chinstrap penguins lying on their bellies, scattered across the snow. Their warm, snug feathers and a few, much sought-after pebbles, were all that stood between their precious white eggs and the frozen tundra below. We stood watching these natural comedians squabble over the stealing of stones; but amid the squawking swarm, there was one incongruous little face that didn’t quite belong. With his luminous yellow crest of slicked back feathers and large orange beak, a single macaroni penguin (a species that we had been warned we would almost certainly not see) stood defiant and alone in the middle of the huge alien colony. Whether he was lost, lonely or simply didn’t realise he was different, Kevin, as he came to be known, became an instant cult hero for everyone on-board.

The wildlife encounters kept on coming. Huge hoards of Adelie and gentoo penguins provided the most entertainment, while Weddell, crab eater, elephant and leopard seals all did their best to sneak into everyone’s holiday albums as well. When our attention was not totally absorbed by the loveable critters, we couldn’t help but become entirely captivated by the surrounding glaciers. Taking a few moments to listen to the purest of silences would often be rewarded with the punctuating creaks and cracks, then thunderous blasts of a nearby ice sheet calving, then plummeting into the water below, bringing a brand new iceberg miraculously to life.

Life on board the Ocean Diamond

Over the next few days the weather improved to such a degree that I was warm enough in just a t-shirt as I gleefully trekked around so-called penguin highways – the paths through the snow, forged by the birds as they waddled to and from the now perfectly still ocean. As we sailed through the Lemaire Channel there was even a barbecue hosted on the outer decks. This was one of the most extraordinary dining experiences you could ever wish for; with steep, snow covered, brooding mountain peaks drifting past on both sides, all mirrored in the ice-studded waters below.

“The memories of Antarctica, for anyone lucky enough to visit, will last forever.”

Then there was the polar plunge. Call it crazy, adventurous, or utterly ridiculous, this tradition of leaping from the loading area of the ship into the frigid waters of the Southern Ocean was (unfortunately for me) a condition of travel set out by my esteemed ‘friends’ at Quark and Discover the World. ‘Refreshing’ would be one way of describing it, but this, strangely, wasn’t the word I used at the time! Bizarrely, a record breaking 64 of my fellow passengers also decided to join in the fun.

On our return to Argentina, the Drake was kind. It settled enough to allow sightings of minke whales and various hopeful albatross, which followed in our wake in the mistaken belief that we were fishermen primed to pull a bounty of fish from the rich waters beneath at any moment. As Ushuaia came slowly back into view, we reflected on how lucky we felt to have experienced a fragile land that so few others are ever likely to know.

The history and future of this relatively newly discovered realm play a key part in any voyage to Antarctica. It is easy to forget that without the, at times, controversial self sacrifice and heroics of early twentieth century explorers like Shackleton, Scott and Amundson, we might not yet know of the wonders to be found on this mystical continent. And without the devotion and protection offered by those who have since fought to keep Antarctica free from political meddling and human greed, it is horrifying to imagine what would have become of Earth’s last true wilderness. Fortunately all tour operators to the region have very strict, self imposed guidelines to follow, meaning once a ship has departed, only footprints remain and only photos have been taken. The memories of Antarctica, for anyone lucky enough to visit, will last forever.

Gary travelled on an 11 day Classic Antarctica Voyage with Quark Expeditions, aboard the Ocean Diamond and advises “when travelling to Antarctica it is important to choose the ship that’s right for you, as the activities, passenger capacity and inclusions vary from ship to ship”.