Revisiting my Art Suite at the 25th Icehotel 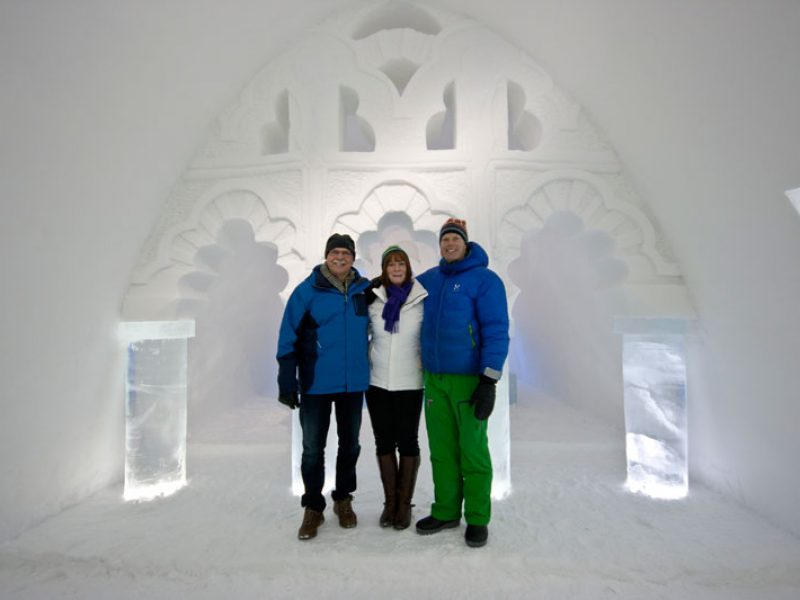 Telegraph Travel Awards winner, Mike McCrow, went to visit the suite at the Icehotel that he helped design. Here’s his account of the visit.

My wife Shirley and I have had a remarkable and unforgettable experience visiting the Icehotel. We were met at reception by Jens Ivarsson, the artist who took my ideas and has turned them into an Art Suite at the Icehotel – then it was a bit of a blur. He took us to the cold complex, accompanied by a photographer, Jens’ daughter and his friends from Gothenburg. He talked us through the layout of this part of the hotel, the displays and finally took us into the Cordoba suite.

It took a few seconds to take in the geography of the room, the archways and the overall effect. I had never been called upon to notice the effect of light on the ice until now. Light through ice makes the shadows less harsh, but its strength ebbs and flows as it passes through varying thickness of the ice sculptures. The warm and cold colours caused by the passage of light through the ice were beautiful to behold.

I understand they were working on its completion up until the morning we arrived. It was stunning. Jens’ interpretation of the notes and photographs I had sent him of our experiences in Cordoba and Spain, together with his own research, exceeded all our expectations.

The Islamic archways from Cordoba’s mesquite are created in the ice, dividing the room into two parts so you can view one part from the other. The stories of our involvement in Spain, of our adventures and visit to Cordoba were all captured in the frozen ice panels on the wall. They added reason and meaning to the suite. There’s also a cleverly designed blue panel with our portrait silhouettes at the end of the room, which you can see through the archway whilst you lay in your sleeping bag on the bed. This was a really great touch.

We were photographed and videoed, celebrated with champagne and were interviewed by John O’Ceallaigh, a journalist from the Telegraph, whom we met as we cleared customs. It was truly memorable occasion.

We spent our first night at the Icehotel in our Cordoba suite. Shirley slept through; I found it a little harder, but it is an experience that has to be tried.

The following morning we were ice sculpting. We found that ice is so easy to work with, and within moments you become completely lost to your surrounds as you try to create a masterpiece – or not as the case may be! I was rather proud of my head of a man when the session was over. Shirley’s block of ice for sculpting had a beautiful fern frozen into it that she was able to incorporate into her sculpture.

Later on, the husky sledge ride over the great lake was brilliant. When we stopped for coffee, cooked over an open fire like cowboys, the dogs howled to get going again. They love it and are well cared for. Teams are changed if they tire as there are many dogs. You get the feeling they are as proud to work as their human handlers. Their eyes are like aquamarines and they are cross bred with several breeds – including greyhounds like our own Jimmy.

When the dogs retire they are used to train puppies, until the natural end of their lives at 13 or 14 years. When we stroked them they rolled over on their tummies. They are so strong and can run for 100km when they are 8-9 years old. In the summer they rest and then as winter approaches they are slowly reintroduced to the sledges until they have rebuilt their muscle.

Our next excursion was the BMW Mini driving, again on a frozen lake. For this, we teamed up with another couple – Rob and Bev Hall. Rob and I shared the driving and our good ladies were passengers in the back.

This was brilliantly exhilarating stuff. Great instruction, enthusiastic and professional instructors all added to this event. And boy did we have fun, thrills spills and great sense of achievement whilst learning a new skill. Breaking on ice at speed. Breaking to the left or right whilst avoiding an imaginary elk in the road. Next slalom course using the vehicles’ electronic stability control – and then with it turned off. Finally an hour or more doing circuits on a two and half kilometre course with lots of bends and corners.

Unlike some of compatriots on the session we did not once beach the car on a snow bank and have to be rescued. Four hours just flew past.

In the afternoon I met up with Jens again and he gave me a tour of the design team’s offices, introduced me to some of his colleagues, and explained the annual cycle of the ice room complex design and how the themes are selected for the ice rooms. He also explained the building and manufacturing processes, including the warehouse for the storage of the two tonne ice blocks from the Torne River ice, and showed me some of the commercial activities that occur worldwide – for example the ice catwalk they made for the Paris Fashion show in 2010.

The last event of our break was northern lights snowmobiling. It was a clear evening with the moon and stars out when our group departed. After 30 minutes or so we stopped on a frozen lake to stretch our legs and warm up a bit. A little cloud was beginning to stretch across the sky; we saw a very, very faint trace of the northern lights on the horizon but Katrina our guide wasn’t too hopeful of a greater display as the cloud was increasing.

The journey through the forest and across the lakes was beautiful, and even with the cloud cover the moon was still visible giving rise to a magical landscape. We arrived at our wilderness cabin – resplendent with a roaring log fire inside – to feast on a reindeer wrap, moose stew, apple cake and coffee. It took us less than ten minutes to warm up and shed our layers of warm clothing as we chatted to strangers like they were old friends.

Just before 10.45pm, Katrina stepped out of the cabin to check the sky, and came back quickly to tell us the cloud had cleared and northern lights were beginning a show. For the next twenty minutes our groups witnessed what will be, for most of us, a once in a life time experience. The constant movement of swirls of green light, ebbing and flowing across the heavens was incredible. I was just praying it would not end. We just felt immensely lucky to be there at the time. The Northern lights were the icing on the cake of a wonderful and memorable three days.

Interview with the artist

We had a quick chat with Jens Ivarsson, who facilitated Mike’s ideas being turned into an Art Suite at the Icehotel.

• What’s the most rewarding thing about collaborating with other artists?
That ideas are discussed, turned and questioned before being chosen.

• How different is it working with a non-artist on the design of a suite?
The main difference is that the non-artist person relies more on the designer and they are a bit more careful.

• Where did you start with Mike, and how did you develop the design?
When I first spoke with Mike he had no idea of what to do and said “what can I contribute?” I said that we must start somewhere and asked him to give me six different themes of things that he liked or experienced. I said that he was writing the script and I was the set designer. My job was to try and frame his story and give it some scenery. I choose his story about Cordoba and what Mike and his wife experienced there. I asked Mike to write me a story from their trips to Spain. I then used his story to create the suite.

• How long did it take to physically create the suite?
It takes about 300 hours to build a suite – we worked on it until the morning Mike and Shirley arrived.

• Are you happy with the result?
I had a very good gut feeling about this suite. It has been lots of work and very fun to do. Since Mike is such a wonderful person I really want to make a fantastic suite.

Find out more about visiting the Icehotel