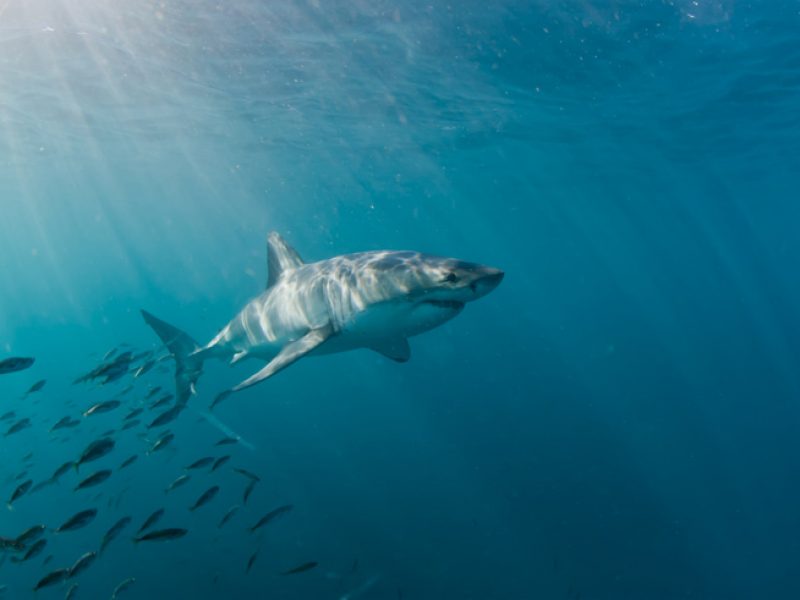 You’ve heard of the Big Five – lion, leopard, rhino, buffalo and elephant – now it’s time to add the Big Blue Five to your bucket list.  Our in-house Travel Writer, William Gray picks five of South Africa’s most enigmatic ocean dwellers and shows you where to go for encounters that will take your breath away.

Getting up-close and personal with one of the ocean’s apex predators is to witness the embodiment of power, grace and menace. Great white sharks can reach 6m in length and are capable of launching attacks on unsuspecting prey, like Cape fur seals, with enough force to launch their two-tonne bodies out of the water. Operating from the fishing village of Gansbaii, a three-hour drive southeast from Cape Town, boat trips visit the 60,000-strong fur seal colony at Dyer Island and Geyser Rock where Shark Alley is patrolled by great whites. Cage diving is available year round, but aim for winter (May-September) when underwater visibility is at its best.

Having spent the summer months feeding in Antarctica, southern right whales migrate close inshore along the Cape Coast to give birth and mate between July and November. Whale watching for landlubbers (or those prone to sea sickness!), a drive along the Whale Route between Cape Town and Durban provides one of the world’s best land-based cetacean-spotting spectacles. The 12km stretch of low cliffs at Hermanus, South Africa’s whale watching capital, offers a particularly good vantage of these hefty leviathans, which can reach 17m in length and weigh up to 80 tonnes. Sometimes you get a close enough view to see the distinctive callosities (rough patches of skin) on the whales’ heads – a feature used by scientists to identify individuals.

OK, it’s just a bird. But Cape gannets are big birds with wingspans of up to 2m. And they also form big colonies. At Lamberts Bay, about 250km north of Cape Town, up to 25,000 of these blue-eyed beauties nest on Bird Island – a small nature reserve connected to the mainland by a breakwater. Of the six sites worldwide where Cape gannets breed, Lamberts Bay is the only one easily accessible to the public. A hide offers intimate views of courting pairs, rattling their bills together, bowing solemnly and tossing back their heads in effusive displays of avian affection. Beyond the gannet colony, you can see Cape fur seals hauled out on rocks, while cormorants and African penguins are also frequent visitors.

A buzzing beach resort on South Africa’s Garden Route, trendy Plettenberg Bay, or ‘Plett’ as it’s known to locals, is not only a magnet to festival followers and the cocktail crowd… dolphins like to hang out there too, particularly some really cool bottlenose dolphins which enjoy surfing in the bay. A boat trip from Central Beach is a great way to witness their synchronised wave-riding and gnarly acrobatics. Rarer Indo-Pacific humpback dolphins are also sometimes spotted, along with resident Bryde’s whales. Their larger cousins, the humpback and southern right whale, are winter visitors – the humpbacks are heading north towards breeding grounds off Mozambique and Madagascar, but the southern rights linger around the Cape (see above).

Yes, that’s right, the humble sardine – all 15cm of it – swims straight onto our Big Blue Five. Whipping the KwaZulu Natal coast into a foaming frenzy, this little nipper is responsible for one of the world’s greatest wildlife spectacles. The sardine run takes place between May and July when vast shoals of the diminutive baitfish migrate towards South Africa straight onto the menu of whales, sharks, dolphins and seabirds. Boat trips give experienced divers (and brave snorkelers) the opportunity to witness 3m-long bronze whaler sharks and both common and bottlenose dolphins corralling the sardines into tight bait balls, bombarded from above by Cape gannets. Occasionally, in a kind of ‘one-gulp-takes-all’, a Bryde’s whale will be attracted to the commotion and swallow thousands of hapless sardines in a single mouthful.