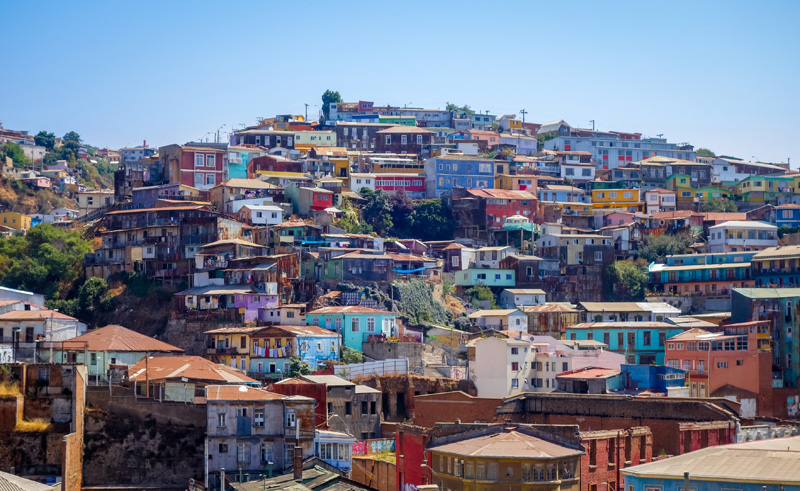 Depart in the morning for a full day tour of two characterful coastal cities which offer very different vibes from each other and their big neighbour, Santiago.

First, visit Vina del Mar, also known as the “Garden City” because of its beautiful beaches, green parks and flowery landscapes. The peaceful seafront is an attractive complement to the city’s busy streets and modern infrastructure.

The second destination is the bohemian city-port of Valparaiso. Founded in the 16th century, Chile’s second largest metropolis was declared a World Heritage Site by UNESCO in 2003 and offers a unique and fascinating architectural adventure. Once one of the world’s busiest ports, (before the opening of the Panama Canal redirected shipping traffic in the early 20th century), the city was built on several steep hills that rise up from the ocean. The colourful homes and artistically graffitied buildings that adorn many postcards can be reached by walking the slanted streets, climbing the long stairs or by taking the famous cable cars built in the late 19th and early 20th centuries.

Notes: Museums are closed on Mondays and public holidays.

A visit to the Pablo Neruda Museum “La Sebastiana,” the former home of Pablo Neruda (one of Chile’s most renowned poets who was awarded a Nobel Prize in Literature,) can be arranged in Valparaiso – private tours include the entrance fee.

from £2,740
excluding flights
11 nights Jan-Mar, Oct-Dec
A perfect combination of Chile's most iconic regions.
Discover more
How to Book
Call us on 01737 214 250 to discuss your plans or
Enquire Now
Browse the website