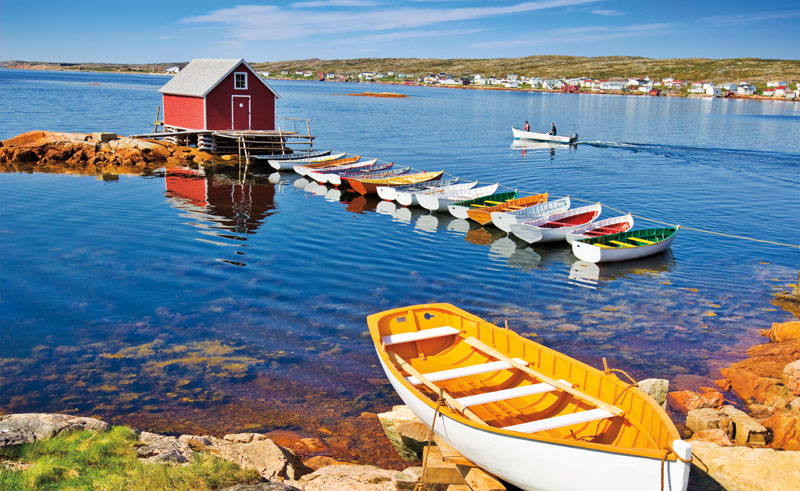 This easterly region of Canada encompasses the four provinces of the country sharing strong cultural associations with the Atlantic. Coastal charm exudes from the Maritime provinces of Nova Scotia, New Brunswick and Prince Edward Island, whilst dramatic Newfoundland and Labrador make up Canada’s most easterly province. Here you will find villages full of character, a wealth of nautical history, rugged coastal scenery and a very warm welcome and as you might expect, there are a wealth of recommended experiences for those visiting this region.

The nutrient rich waters off the coast of Atlantic Canada are amongst the most productive in the world where up to 12 species can be found including humpbacks, minke and the endangered North Atlantic right whale. Whether you sail from Newfoundland or cruise the Bay of Fundy, the chance for an epic encounter with a cetacean is an experience not to be missed.

From the charming fishing villages of Nova Scotia to the aged icebergs that are regularly sighted off the Newfoundland and Labrador coast, this region offers some truly enchanting coastal touring. Discover colourful Lunenburg and the famous lighthouse at Peggy’s Cove, perched on the rugged Atlantic shoreline or drive the splendid Cabot Trail, one of Canada’s most scenic drives that hugs the Atlantic Coast as it skirts the Cape Breton Highlands.

Separating Nova Scotia and New Brunswick, the Bay of Fundy boasts the highest tides in the world and a wealth of marine life to boot. The region also boasts a number of UNESCO World Heritage Sites – don’t miss the Viking settlement of L’Anse aux Meadows and dramatic Gros Morne in Newfoundland, or the old town of Nova Scotia’s picturesque Lunenburg as well as Joggins Fossil Cliffs.

From a seasonal perspective, with around 85% of New Brunswick covered in forest the autumn colours make for a fantastic spectacle on a September self-drive holiday. By contrast on Prince Edward Island, Anne of Green Gables’ fictional home in Canada’s smallest province, is where you will find red sand beaches, rolling farmland and azure seas.

from £2,027
excluding flights
13 nights May-Sep
Embrace the beauty of the Maritimes on this comprehensive self drive itinerary visiting the Nova Scotia, Prince Edward Island and New Brunswick.
Discover more

from £1,390
excluding flights
10 nights Jun-Sep
Enjoy picturesque coastlines, marine wildlife and fresh seafood on a self-drive through the Maritimes.