Did You Know This About Puffins? 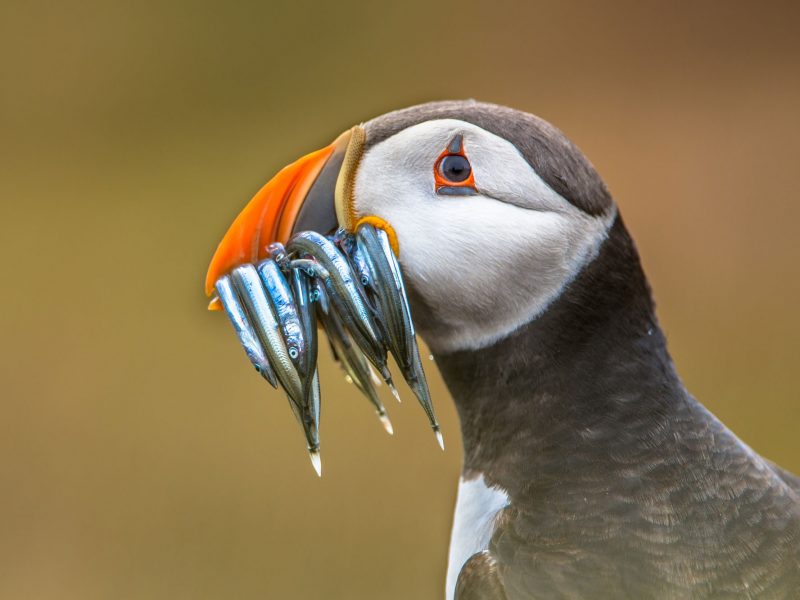 Beloved by birders and nature enthusiasts everywhere, puffins are one of the most widely recognized, and arguably one of the most popular birds in the world. Puffins have a photogenic, cartoon-like appeal, with black and white feathers and a large, colourful beak. They are captivating and peculiar with several unique nicknames: ‘Sea Parrot’, ‘Penguin of the North’, ‘Clown of the Sea’, learn everything you need to know about these fascinating seabirds with our round up of interesting facts.

1. There are four species of puffins.

The Atlantic Puffin, the Tufted Puffin, the Horned Puffin and the Rhinoceros Auklet. Three of the species are slightly distinguishable from one another. The Atlantic and Horned puffins look quite similar, with the exception of a blue-grey triangle at the base of the Atlantic puffin’s beak. During the mating season, straw-like feathers protrude from the crown of the tufted puffin’s head. Whilst the Rhinoceros Auklet, doesn’t look like the other three – it’s ashen coloured, with a rhino-like protrusion during the breeding season. But it’s still technically a puffin.

Iceland is the puffin watching capital of the world, with 8 to 10 million Atlantic puffins inhabiting the island.

3. A puffin weighs about the same as a can of Coke.

4. They are only colourful during spring

5. Puffins spend most of their lives out at sea, resting on the waves when not swimming.

Puffins are well suited to life on the sea and only return to land to breed. They are excellent swimmers that use their wings to stroke underwater with a flying motion. They steer with rudder-like webbed feet and can dive to depths of 200 feet, though they usually stay underwater for only 20 or 30 seconds.

They aren’t known for flying but by flapping their wings up to 400 times per minute they can reach speeds of 55 miles an hour. It’s an extremely amusing sight to behold!

6. Puffins are carnivores and live off small fish such as herring, hake and sand eels.

Whilst at sea, puffins make the most out of a fish buffet! Puffins are also one of the few birds that have the ability to hold several small fish in their bills at a time. Their raspy tongues and spiny palates allow them to firm grasp 10 to 12 fish during one foraging trip.  This means that they can can bring more food back to their young compared with other seabirds.

Puffins are monogamous. They usually mate for life and a couple can stay together for over 20 years! They raise their single chick (or puffling) over the course of summer and return every year to the same burrow with the same mate.

In spring and summer, thousands of puffins gather in colonies on the coasts and islands of the North Atlantic Ocean to breed. They dig their holes (or burrows) using their beaks and feet. They prefer to make their burrows in earth or between rocks on steep cliffs so predators cannot easily reach them. The burrows are up to one metre deep.

9. The puffin is not the Icelandic national bird.

Iceland’s national bird is the magnificent Gyrfalcon, the largest falcon in the world. Slightly more graceful than the puffin, but not as likeable and colourful.

10. Puffins may chatter up a storm at their breeding colonies, but they remain perfectly silent while at sea.

11. Puffins cannot fly unless they have a view of the ocean.

12. The name puffin refers to how the young birds look

The word puffin is thought to come from, quite simply, the word “puff” and when you see a swollen-looking puffling it’s easy to see why. They have a fluffy ball of dense down feathers adapted to keep them warm while their parents are off fishing.

The scientific name is less literal, though. Fratercula arctica was coined in the late 1800s and means “little brother of the north” in Latin. It’s said to be because the black and white feathers look like the robes of a religious friar. Taking this even further, some say that when puffins take off to fly they hold their feet together in such a way it looks like hands clasped together in prayer.

To plan your own bird watching adventure, contact our team of Travel Specialists on 01737 214250 or send an enquiry to discuss options that suit you.