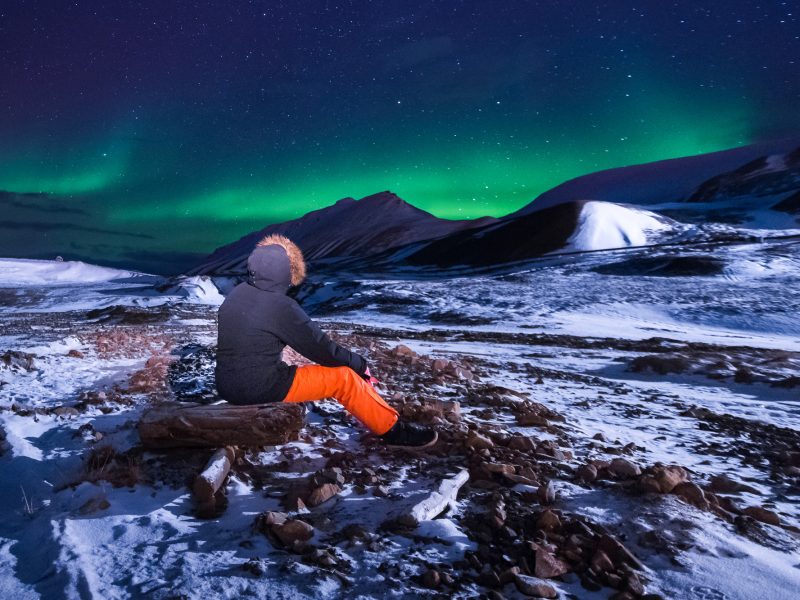 Located on a latitude of between 74° to 82° north, Svalbard is the very definition of “off the grid”. This particular Arctic archipelago is one of the most unique (and northernmost) places you can travel too. Most people tend to visit Svalbard to see the midnight sun or the northern lights, but there is so much more to these icy islands. Here’s some of our favourite facts that may well surprise you about Norway’s far-flung Arctic archipelago…

Svalbard is ice-bound in winter

You won’t get far until summer arrives. Throughout winter and much of spring, the seas surrounding Svalbard freeze over. It’s only around mid-June, with rising temperatures and 24-hour daylight that the pack ice melts, retreating to reveal a spectacular fjord-riven coastline. Setting off from Longyearbyen on the main island of Spitsbergen, expedition ships enter this pristine Arctic environment in search of polar bears, walrus and prolific bird life.

Svalbard has is home to world’s northernmost…

And ATM, coffee bar, chocolatier… With coal as its bedrock, Longyearbyen has become a small but fully-fledged town with a hospital, university, post office, supermarket and, yes, even a brewery. Tourism has also transformed the town. During winter, you can go snowmobiling, husky sledding and aurora hunting, while summer is cruise season – prime time for spotting polar bears and going ashore to hike gently on the flower-speckled tundra.

Svalbard is home to a globally ranked ghost town

According to National Geographic the abandoned mining settlement, Pyramiden, is ‘one of ten ghost towns in the world you need to visit’.

Pyramiden was founded by Sweden in 1910 and sold to the Soviet Union in 1927. In the 1980s, the mining community had a population of more than 1,000. Now, the only things than remain in this hollowed out haunt is an indoor swimming pool, theatre, music room and library. It is named after the pyramid-shaped mountain of the same name nearby. Whilst it mostly seagulls, polar foxes and, not infrequently, polar bears that visit this ghost town, tourist can experience this surreal place by boat in the summer and snowmobile in winter.

Svalbard has its own species of reindeer

There are an estimated 10,000 reindeer living in Svalbard, aptly named Svalbard reindeer! They have populated Svalbard for around 5,000 years and are the smallest reindeer in existence. They are lighter in colour and have shorter legs.

Because Svalbard receives such little rainfall, it qualifies as a desert like other polar areas. Its total precipitation averages about 200mm (7.8 inches) of rainfall and snow a year.

Svalbard is a summer paradise for birds

The islands get all of a flutter in summer. Geese love the place. Over 50,000 pink-footed, 30,000 barnacle and 7,500 brent geese nest on the tundra, along with 17,000 pairs of eider ducks. Svalbard’s dramatic sea cliffs, meanwhile, are transformed into buzzing seabird citadels. Several million pairs of little auk, common and Brunnich’s guillemot and kittiwake festoon the precipitous ledges of colonies at key sites such as Hornsund, Bellsund, Krossfjorden and Alkefjellet.

You can see the northern lights during the day

The spectacle of Aurora Borealis requires dark and partly clear skies. But in Svalbard, you don’t need to wait until the evening for they sky to get dark. Because of Svalbard’s far northern location, the daytime hours from October through February offer only a small window of light. During these long polar nights, if the sky is clear enough, you can easily go on the hunt for the famed auroras throughout the day.

You can also see the midnight sun

In Svalbard, the Midnight sun is omnipresent, and it lasts from late April to late August. Many people connect the midnight sun with summer, but during the first few weeks of midnight sun it is still full winter on Svalbard, allowing for fantastic experiences with skis, dog sleds or snowmobiles around the clock.

You can find national parks from Norway

Norway’s national parks are created to ensure the preservation of nature for future generations. They are scattered all over Norway, with 85 percent of them being mountainous. However, there are seven of Norway’s 47 national parks in Svalbard: Forlandet, Indre Wijdefjorden, Nordenskiöld Land, Nordre Isfjorden, Nordvest-Spitsbergen, Sassen-Bünsow Land, and Sør-Spitsbergen.

Take your shoes off when entering buildings

This tradition dates back to the time when the only people who lived in Longyearbyen were miners. To prevent the black dust from covering the interior of buildings, it became commonplace to remove outdoor shoes at the door. This tradition continues today, when stepping into museums or hotels, with many establishments providing slippers and a shoe rack.

Find out more about Svalbard and holidays to the archipelago’s largest island, Spitsbergen, or contact our Travel Specialists for a tips and holiday suggestions…