In Search of Polar Bears in Churchill 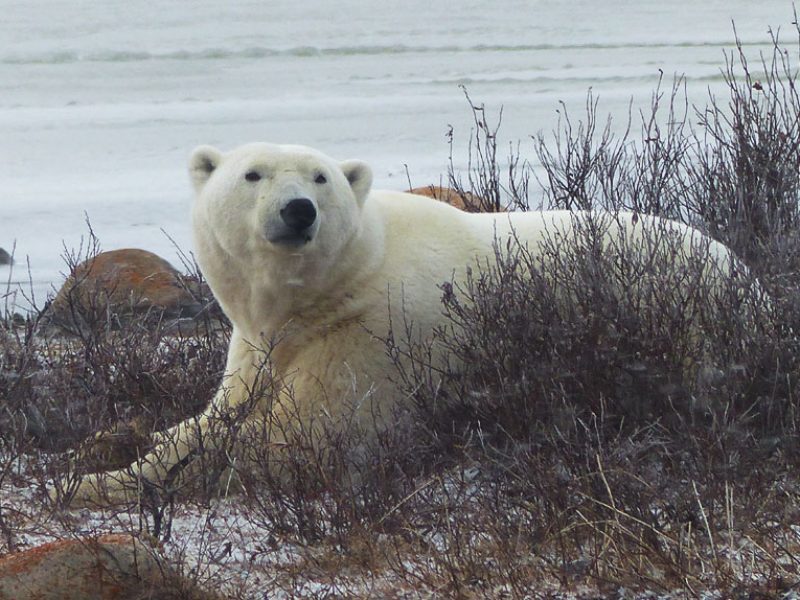 Pam from our Marketing team travelled to Churchill in northern Canada in October on a 5-night Classic Polar Bear Adventure on a quest to find great white bears.

With my trip to Churchill fast approaching, the excitement of getting up close and personal to the world’s largest land predator was building. How many would I see? How close would I get? Would my photographs be award-winning?

I also couldn’t help but wonder if my forthcoming encounter with the symbol of the Arctic would draw parallels to my experience meeting the icons of the southern Polar region, penguins. Having been privileged to visit Antarctica a few years ago and enjoy some magical moments amidst colonies of gentoo and Adelie, the thought of now witnessing polar bears in their natural habitat seemed somewhat symbiotic.

I can still vividly recall the moments before my first landing on the South Shetland Islands after two days at sea crossing the Drake Passage and the incredible expectation of seeing penguins up-close for the very first time. I was literally shaking with excitement. Would it be the same for my first polar bear sighting? I was, after all, visiting the ‘Polar Bear Capital of the World’, so called because of the extraordinarily high concentration of bears that congregate in this relatively small area on the edge of Hudson Bay each autumn waiting for the sea ice to form. Entirely on the animals’ terms, this unique gathering is a blessing for wildlife enthusiasts.

Much like visiting Antarctica, I could feel the anticipation growing incrementally with each segment of my journey. First the arrival in Toronto, Canada and onwards to Winnipeg, Manitoba to rendezvous with the group. Then the charter flight north the next day to the remote sub-Arctic outpost of Churchill. Next, an unscheduled detour within 20 minutes of arrival to track a lone bear wandering on the outskirts of town (and thus in the designated exclusion zone). Finally, setting off in a Polar Rover – a wonderful, purpose-built beast of a vehicle with 5′ tyres and exterior viewing platform – for our first outing on the tundra. My internal ‘thrill meter’ was definitely reaching critical mass.

Fast forward thirty minutes or so and something was malfunctioning with the meter – it was dropping! Despite 17 pairs of eyes trained on every visible expanse of tundra, there were no bears to be seen. Within seconds of making land in Antarctica I’d been surrounded by penguins and had hardly been able to keep my hands still to take photographs, such was the adrenaline rush.

Where were the bears?

It was time for a reality check. Despite my hopes for bookend Polar encounters, the reality is that the natural habitat and behaviour of penguins and polar bears make for very different wildlife experiences. Penguins reside in colonies, large colonies scattered over beaches, hillsides and plains that they are content to share with visitors. While humans are requested not approach closer than around ten foot of a bird, there is no such limit on curious penguins approaching humans.

In contrast, up-close interaction with polar bears is not considered a sensible option for either human or bear (unless from within the confines of a vehicle). They are generally solitary creatures, mostly spotted alone or sometimes with cubs. Even with the high density (relatively speaking) of bears on the tundra around Churchill, they tolerate each other rather than actively seek company. In short, when it comes to viewing polar bears, much like whale watching for instance, patience is a prerequisite. So, resetting my expectations, I reached for my binoculars and prepared for a heroic search.

Naturally, only moments later we spotted our first bear. And then another. Typical! And oh yes, exciting! Totally transfixed and with my heart beating faster again, we drove off along the tundra trail for a closer look.

Then something rather wonderful happened. A sudden and rather determined shout from our group members in the rear of the Rover drew our attention to the polar bear, that is, the largest land predator in the world, sitting only meters away casually relaxing in the low-lying willows and calmly watching us. Bear! A big bear! Right there! OK, now my hands were shaking…

The resulting photographs were not the finest I’d ever taken and nor was this the best of numerous encounters we had with polar bears over the course of two further full days on the tundra – a majestic creature approaching from a distance across a frozen pond and coolly walking up to our Rover for a closer look, before disappearing into the foliage was undoubtedly the most thrilling encounter – but as first interaction goes, the sleepy bear laying in the willows as the late afternoon light faded, was pretty amazing.

Enjoy your own memorable moments with this majestic animal on one of our polar bear holidays in Manitoba, including the Classic Polar Bear Adventure.

For help and advice on planning your perfect polar bear adventure, send an online enquiry or speak to one of our Travel Specialists on 01737 214 250, who will be happy to share first-hand experience.

Award-winning travel writer and photographer, William Gray heads to Canada's Churchill to catch a glimpse of the mighty polar bear.

Vanessa and Roger Draper travelled with us on our Polar Bear Photo Safari in November, staying at the remote Seal River Heritage Lodge. Despite having limited photographic experience, with the help of an expert guide they captured some truly stunning wildlife shots, as shown below! Here they recount their adventures in the Canadian Arctic...

Meeting the ice bears of Churchill

What is it really like getting up close to mighty polar bears on the tundra outside of Churchill, Canada? Erin recounts her experience.

Where to Find Polar Bears

Discover the kingdom of the ice bear with our guide on where to travel to see the Arctic's most impressive creature...