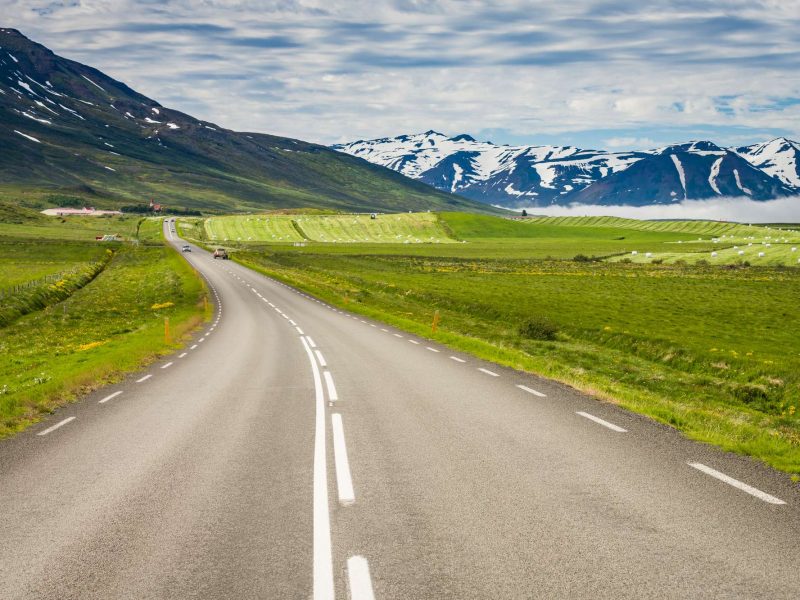 Summer 2019 saw the launch of Iceland’s first official touring route. The Arctic Coast Way winds 900 km through some of the country’s most dramatic scenery. From wild peninsulas where cliffs throng with seabirds to fjord side fishing villages glinting under the midnight sun, the north coast of Iceland is crying out for an adventurous self-drive. Here’s what you can expect from Iceland’s epic new road trip.

Usually bypassed by tourists in favour of the south, North Iceland has flung its doors open to visitors – all thanks to the Arctic Coast Way. Connecting Hvammstangi on the northwest coast to Bakkafjordur in the northeast, the route is the mother of all road trips, showing off a side to Iceland that’s a world away from busy Reykjavik and the Golden Circle. It’s a side that’s remote, with spectacular scenery, wildlife and packed with adventure.

As the name suggests, the Arctic Coast Way winds along the northern coastline, hugging cliff tops, peninsulas and beaches and offering up views that are out of this world. It passes through no less than 21 villages, where the local people usually have time for a chat and a story to tell.

There’s no shortage of activities along the way, either. You’ll find ample opportunities for kayaking, hiking, whale and puffin watching, while the magical midnight sun in the summer months, or northern lights during early autumn, are experiences in themselves.

We could write reems on the astounding sights that the Arctic Coast Way has to offer. But for starters, here are six definite highlights.

Whether you decide Hvitserkur is an impressive 15-metre basalt rock stack resembling a dragon or a petrified troll, your imagination (and your camera roll) will thank you for tracking it down on the Vatnsnes Peninsula.

The picture-perfect village of Siglufjordur is well worth a stop at. While away the hours in the cafes dotted amongst the historic and colourful harbourside buildings or visit the Herring Era Museum.

60 km Eyjafjordur cuts deep into the north coast, playing host to the unusual baths at Beer Spa and the capital of North Iceland, Akureyri.

Europe’s whale watching capital, Husavik is the place to be if you want to spot minke, humpbacks and even blue whales. Don’t miss a trip to the fascinating Whale Museum, too.

The Arctic Henge project is an impressive monument for Pagan worshippers, inspired by (you guessed it) our very own Stonehenge. You’ll find it in the village of Raufarhofn, in the east of wild Melrakkasletta.

See the birds of Langanes

The majestic sea stacks on the Langanes Peninsula are full of nesting gannets and guillemots. The sea stacks themselves are impressive – look out for Storkarl, the most famous one.

We’re the first travel company to plan an itinerary around the Arctic Coast Way – and it’s a good one. The 11-night self-drive route includes car hire, all your accommodation and exclusive use of iDiscover, an app designed to help you make the most of your trip. Drop us an email or call one of our travel specialists on 01737 214 250 to find out more.