Svalbard: What’s it like to experience the polar night? 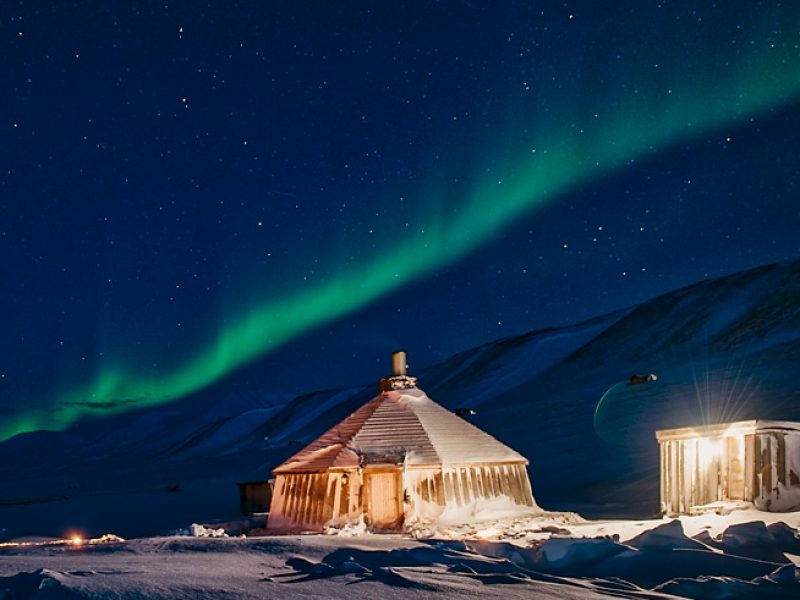 Nowhere can you experience the polar night so easily as the Svalbard archipelago. It’s a mesmerising time of year and provides superb aurora viewing opportunities, as well as activities that allow you to experience life as a polar explorer. Travel writer William Gray reports from the Land of the Polar Night.

“You must be sad to see the sun leave in October,” I asked one of our guides in Longyearbyen. “No,” she replied. “Our eyes are sore from so much midnight sun. We look forward to some darkness. It also makes you appreciate how the earth, sun and planets really work…”

When the polar night throws a shroud over Svalbard (Europe’s far-flung Arctic archipelago), the 2,000-odd inhabitants of the main settlement, Longyearbyen, resist hibernation, depression or the first SAS flight south – they actually embrace this strange season of perpetual night known as Mørketiden (the dark period). Life not only endures, it flourishes. That’s fine for hardy locals, you might think, but is this Arctic outpost really a holiday destination in the middle of the long polar winter? I spent five nights or four days – actually, let’s just call it one long night – finding out.

21 days. 8 hours. 15 minutes. 27 seconds. In the reception area of the Coal Miners’ Cabins where I’m staying, the countdown clock for when the sun will finally break above the horizon again is juxtaposed against an aurora forecast map. Great expectations either way you look at it. But outside, it was midday, and there was another astronomical phenomenon taking place – a subtle, yet mesmerising twilight; deep shades of blue seeping across snow-covered mountains and fjords. The peaks were silhouetted against an almost imperceptible light in the east where the sun still lay shy of the horizon. It would be another two weeks before it cast a pinkish glow on the summits.

The day (in early March) when the sun is finally expected to wash over Longyearbyen is cause for great celebration. Traditionally, families gather on the steps of the old hospital; children’s faces are painted with suns and they chant and shout for it to appear. The first rays are greeted with cheering, dancing and a feast of jam-filled cakes. A few minutes later the sun dips back behind the mountains. But it’s returned, that’s what matters – and each day will be longer and brighter than the one before.

All credit to local hero Roald Amundsen for reaching both poles and leading the first expedition through the Northwest Passage. And hats off to Willem Barentz for discovering Svalbard in 1596. But there’s only one person you’ll be worshipping when you set off on a 120km snowmobile ride through Svalbard’s polar night when temperatures have plummeted to -32oC. And that’s the genius who invented heated handlebars.

Snowmobile safaris begin with an indoor briefing. It takes longer to issue clothing (polar suits, balaclavas, helmets, mittens etc) than it does to explain how a snowmobile works: right hand throttle, left hand brake (although you rarely need to use it), lean into corners, don’t overtake, leave a three-second gap between yourself and the snowmobile in front. There’s no gear shift; even the headlights come on automatically.

Your biggest concern is ‘throttle thumb’. Despite the throttle lever also being heated, the tip of your thumb soon feels the vicious bite of Arctic windchill. As we set off into Advent Valley, east of Longyearbyen, there was a blue glow in the east and the mountains were waxy-white. The lights of Mine 7 winked on a mountain top to our right. Venus was low and startlingly bright in the south.

With no trees to leap out and collide with you, snowmobiling in Svalbard is fast, straight and exhilarating. Even confident beginners will soon be nudging 50kph. Every 20 minutes or so, our lead guide halted the single-file column and there was a wonderful moment of silence when all the engines were switched off. And I mean pure Arctic silence. It was one of life’s Interstellar moments – you might as well have been sitting astride a moon buggy in the middle of some desolate, empty, achingly silent plain on an alien planet. With luck, no one talks for a good minute or so.

We drank coffee and the guides made us do star jumps to keep warm. They also have a party trick (you will experience this on every activity you do in Svalbard during winter). A flask of hot water is thrown in the air and it instantly freezes into a glittering arc of white ice crystals. There were more ‘Oooh, aaah’ moments as we continued towards Templefjorden, faint teal and crimson wisps of aurora flickering like cosmic candlelight above us. Our destination was a narrow horseshoe-shaped canyon with a frozen waterfall at its head. Lunch was an expedition-style sachet of freeze-dried pasta bolognaise brought to life with boiling water. By the time we backtracked to Longyearbyen – our eyelashes frosted and our toes and fingers tingling – we’d had a taste of what it must be like to be a proper polar explorer.

Puppies first. At Green Dog kennels a few kilometres outside Longyearbyen, a whole pack of them were desperate to chew our boot laces, run off with lens caps and wee on our polar overalls.

There were 199 adult dogs at the kennels. As with any husky adventure, chaos ensued when the dogs sensed the impending call of the wild and whipped themselves into a barking, slavering frenzy. The darkness didn’t help. Nor did the downhill slope of compacted ice that we were immediately confronted with. But we soon settled into something of a rhythm, the sled squeaking over the frozen trail and my lead dog, Berserk (a black and white wolf with sapphire eyes) howling in protest whenever we had to stop.

We followed a 16km circuit through an offshoot of the Advent Valley. Our guide, Lara, was from Brisbane. I wondered how someone from the Sunshine State coped with the Polar Night. She said the dogs operated best at temperatures between -10 and -20. During summer, when they’re pulling carts along the road in Advent Valley, they easily overheat and she has to throw them in a lake to cool down.

Ice Caving in the Longyear Glacier

The snowcat was a go-anywhere, climb-anything, caterpillar-tracked monster-machine with its own heated carriage for 16 or so guests. Of course, we got stuck. The pass at the head of the valley above Longyearbyen required four attempts, and it was only when we were discharged to lighten the load that the snowcat finally clawed its way to the top. There, we found a small igloo built over the entrance to a natural ice cave in the Longyear Glacier.
Created by a summer meltwater channel, the passageway only probed about 50m into the glacier (it’s sometimes possible to go further), but that was enough to transport you into a surreal subterranean world of water-polished ice tunnels embellished with icicles and frosted patterns. You are equipped with helmets and head torches, and need to descend a short ladder to access the cave, but thereafter it’s an easy, stooped walk. Expedition lunch (this time just add boiling water to beef casserole) included.

An unexpected highlight of this trip were the views above ground. From the vantage of the pass, you could gaze back down the valley where a rash of orange lights marked Longyearbyen hunkered down beside Isfjorden. Look in the opposite direction and you saw nothing but a frigid mountain wilderness, snow pluming from blue-tinged peaks.

For all its pristine Arctic beauty, Svalbard has a dirty secret. Longyearbyen didn’t spring up on the shores of Isfjorden as a polar gateway for tourists or a bolthole for scientists studying climate change… the settlement was founded on coal. The mountains around Longyearbyen are riddled with mines. Only one (Mine 7) is still operational. Some lie dormant waiting for healthier coal prices to nudge them back into productivity. But Mine 3 has found a new lease of life as a tourist attraction.

Our guide, Jim, was a bear of a man with grizzled beard and pony tail. Mine 3 only closed in 1996. It’s as if the workers simply downed tools and left. We shuffled past the shift manager’s office just as the miners used to, collecting metal ID tabs so their bosses, families and emergency rescue teams knew when they were in the mountain. We squirmed into heavy overalls, donned helmets and lamps and followed Jim into the mine. Snow and ice had also found their way inside. It’s a cold, dark, brutal place. Jim showed us electric trains – squat and massive, like giant steel toads – used to haul wagons of the black gold from deep within the mountain. Every now and then, he played a soundtrack to evoke the deafening sounds of a working mine. But we could only imagine the conditions under which the miners must have worked, crawling along passages, sometimes less than 50cm high, dragging sledge hammers, shovels, 30kg jacks, emergency breathing gear, dynamite.

If you are are interested in experiencing the polar night in Svalbard, plan your visit between mid-November to late January. You can see our collection of recommended itineraries here, or speak to one of our travel experts to discuss what a trip to Svalbard could look like.