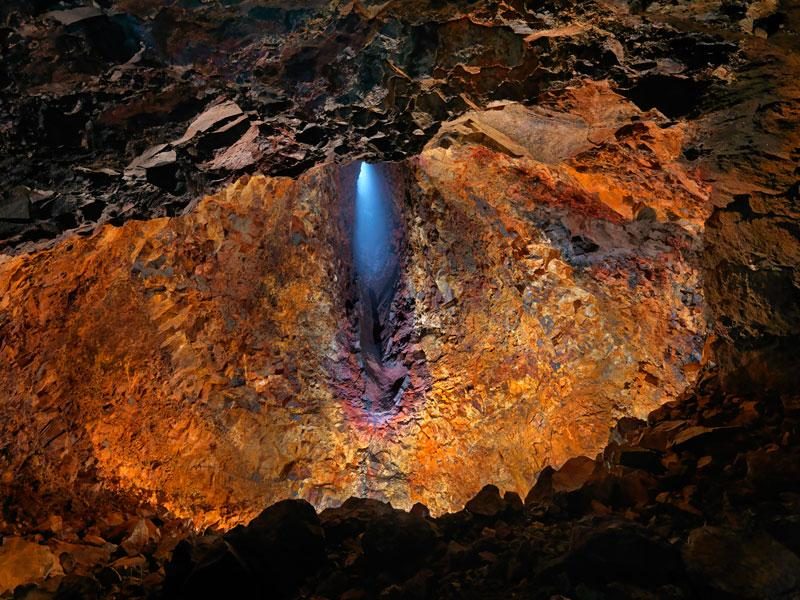 “To descend into the interior of a cannon … when perhaps it is loaded, and will go off at the least shock, is the act of a madman.” So begins the journey to the centre of the earth described in Jules Verne’s 1864 novel, and his words come back to me as I am about to begin my own. I am standing on the summit of an Icelandic volcano, preparing to be lowered through a narrow opening into the vast abyss below.

Thrihnukagigur, a 30-minute drive south-east of Reykjavik in Iceland’s Blue Mountains, is a geological rarity. The volcano’s modest exterior – the cone rises only 35 metres above the surrounding ground – belies the grandeur that lies beneath. While the magma chambers of most volcanoes seal up after eruption, this one has remained open, leaving a 100,000 cubic metre vault where once, 4,000 years ago, red hot lava flowed. It is the deepest of only a handful of such volcanic chambers known on earth and the first to be opened to the public, for a short window this summer.

“I lay down on the stone floor and look up at the needle of light now no bigger than a solitary star.”

The tour begins with a 40-minute hike across a lava field of crunchy black sand and beds of spongy moss and wild flowers. Keeping me company is Arni Stefansson, who originally discovered Thrihnukagigur’s chamber and is responsible for opening it to visitors. Stefansson’s passion is caves – he has been exploring and protecting them all his life – and, in 1973, after hearing rumours of a supposed bottomless pit, he couldn’t resist investigating further. Arriving at Thrihnukagigur, he dropped a stone inside, counting 4.5 seconds before a sound came back. “I thought, ‘This is deep,’” he tells me, his eyes still lighting up with the memory.

He descended that midsummer evening and quickly realised “that we have this beautiful museum, created by the Almighty but it has to have some guardian”. This summer’s six-week season of public tours is, in effect, a pilot study for the project that will serve as that “guardian” – an even more ambitious scheme that will see a tunnel drilled into the side of the volcano, allowing visitors safe and easy access. It will also mean they won’t have to touch the rocks, thus preserving the volcano’s interior. No easy walk-ins for me, though, as I am going to feel every inch of the descent, from the pit of my stomach to my wobbly knees.

After strapping on a climbing harness and helmet, I hike up from the base camp to the volcano entrance. A narrow metal gangplank and open-sided cable lift hang from a steel girder, secured above a black hole four metres across. I walk the plank and absolutely nothing – no sound, or colour, or light – rises up from the darkness beneath me.

As the cable lift gradually lowers us into the abyss, floodlights are switched on, illuminating the walls of the chamber and the base of the volcano floor. The light reveals a tapestry of jagged burgundy lava scars, terracotta bubbles of frozen stone and waves of sunset yellow and orange – the full chromatic spectrum of fire, perfectly preserved in the deep earth. “It’s like going inside a piece of art,” says Stefansson.

Once on the volcano floor, 125 metres below the summit opening, we are free to explore the base of the chamber – an enormous cavern big enough to hold three full-size basketball courts and more than one Statue of Liberty. The tour lasts about an hour and, though features of the volcano are explained, we are mostly left in peace to absorb the magnitude of the space we are in. I lay down on the stone floor and look up at the needle of light now no bigger than a solitary star. I have the impression of having been swallowed, of being in the bowels of some giant stomach, but it is peaceful too. “For me its beauty is in its hugeness,” Stefansson says, “how small you feel in it.” But its beauty is also in its strangeness.

As I watch the lift rise and fall, it feels hard to believe that this is the same world as the one I have just come from. Like peering behind the scenes of a play, or learning the secrets of a magician’s trick, the world feels a little more remarkable having seen the inside of its machinery. Perhaps it is the act of a madman but it feels like a worthy journey all the same.

Aaron Millar is a freelance travel writer from Sussex, UK. He is happiest writing about adventure travel, eco-tourism and off-the-beaten track destinations and cultures. But anything that makes him smile, gawp, sweat or laugh out loud is usually OK by him. He blogs at thebluedotperspective.com; and tweets @AaronMWriter.

First published in the Financial Times on the 7th July 2012