What to do with a few hours in Helsinki 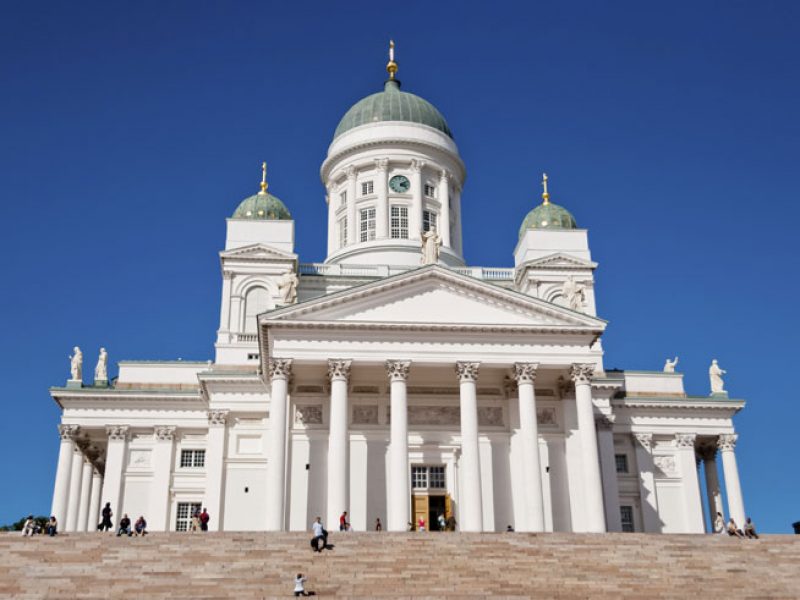 Travelling to North Finland involves a stop over in the capital, Helsinki. So if you have a few hours to spare, take the opportunity to visit a fascinating Nordic city. A trip into Helsinki is a perfect way to spend some time between flights. (There’s plenty to do at the airport if you don’t have much time between connections.)

For those with same day connections, the Finnair City Bus and Airport Bus (number 615 or 620 during night time) leaves from Platform 10 – bus stops are called platforms in Helsinki – and arrives at Platform 30 outside Helsinki Railway Station. The bus ride from the airport takes 35-40 minutes and costs €6.30 when you buy a ticket from the driver.

From here it’s possible to walk around the city and admire beautiful architecture and waterways of the Finnish Capital. The city was redesigned during the nineteenth century and is laid out on a grid system and easily to get around on foot or public transport. The architecture is a mixture of Neoclassical, distinctive Art Nouveau/Deco styles and modern styles that derive from urban renewal and as a consequence of destruction from the Second World War. Finland was formerly a colony of its neighbour Russia (until the 1917 Revolution ended that) and some of the styles show a Russian influence.

Wi-Fi is free and easily available in the well known fast food restaurants and it’s easy to nip in to get a bearing on a smart phone. English is widely spoken and someone will always help you with directions if you need it.

6 things to do in Helsinki

The Rock Church (which was excavated directly into solid rock and completed in 1969) is one of the main attractions in Helsinki. An ice-age crevice serves as the altarpiece, the walls are rough hewn rock and the ceiling is covered with a dome, lined with copper.
Distance from station: 1.2km / 17 mins
Opening hours: Vary – listen to the bulletin tel. +358 (0)9 2340 5940
Visit the website

Situated in the heart of Helsinki, the Esplanade Park serves as a promenade for travellers and a place to relax for Helsinkians. Watch one of the free performances on the Espa Stage which take place from the beginning of May to the end of August.
Distance from station: 900m / 11 mins
Opening hours: the park is open year round. Performance times vary (May-August)
Visit the website

Helsinki’s most international and famous market is located in the South Harbour at one end of the Esplanade Park. Browse booths selling traditional market foods and treats, as well as handicrafts and souvenirs and grab a coffee for some people watching.
Distance from station: 1.2km / 16mins (also tram #2 to Kauppatori – 11mins)
Opening hours: Mon-Sat 8am-4pm, Sundays (summer only) 10am-5pm.
Visit the website

For many it is the symbol of Helsinki, the beautiful Helsinki Cathedral is an Evangelic Lutheran church, designed by architect Carl Ludwig Engel and completed in 1852. It’s one of the four buildings which surround Senate Square
Distance from station: 1km / 13 mins
Opening hours: Open daily 9am-6pm, June-August 9am-midnight. Closed during ceremonies.
Visit the website

The Neoclassical Senate Square is dominated by four buildings designed by Carl Ludvig Engel. In addition to the cathedral there’s the Government Palace, the main building of the University of Helsinki and the National Library of Finland.
Distance from station: 900m / 12 mins
Opening hours: daily
Visit the website

For further inspiration, discover our Top 10 Experiences in Finland or contact our team of Finland Specialists for a tailor made quote.

Browse our collection of Finland holidays