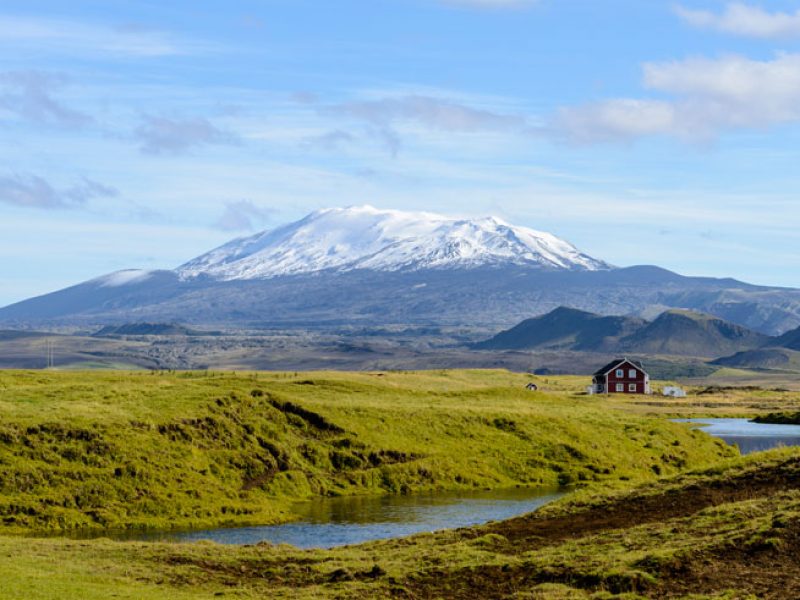 With speculation that an eruption of Mt Hekla could be imminent, we asked our good friend, expert volcanologist and geophysicist Ari Trausti Guðmundsson to give us a bit of background and expert insight into the situation.

In 2010 Eyjafjallajökull became a (somewhat unpronounceable) household name in the UK. However, in a country famous/infamous for its volcanic activity, there are much more active and well known geological hotspots. One of the most prolific is Hekla. Nicknamed the Gateway to Hell in the middle Ages, Hekla’s history stretches back thousands of years with over 20 eruptions since 1104, when the volcano woke up after a rather long repose and caused substantial damage.

Hekla is the centre of a volcanic system 40-50 km long and about 7 km wide, which has a number of volcanic fissures and an elongated magma chamber at about 7-8 km depth. The ridge-shaped mountain itself is well away from any towns, standing northeast of the flat, southern lowlands at almost 1,500m above sea level. The mountain is made of andesitic lava flows and a lot of airborne volcanic material known as tephra; the crest is lined with large and small craters of different ages.

It is a well-known fact that Hekla’s eruptions tend to be more explosive the longer the dormant period gets to be. The eruption in 1104 mainly produced widespread ash and pumice. During a period from the 12th century to 1947, the norm became one or two eruptions every century and their effects were quite heavy at times.

Hekla’s most famous eruption of the twentieth century lasted from 1947-1948. It spread ash to Northern Europe and would have had substantial effects on modern air traffic in the region.

After a rather small lava and tephra eruption in 1970, Hekla changed her mood (the name is female and so is the mountain in the eyes of Icelanders) and erupted once every decade, in 1980/81, 1991 and 2000. These eruptions were also of this mixed type, strong for one or two days but rapidly declining and lasted only a few weeks each with small or moderate effects on the surroundings.

The lava flows hardly reached the base of the mountain and the tephra did not cover large areas with tick deposits. International flight traffic was not affected and many people were able to observe the development close up to the mountain.

What is happening at Hekla now?

Various processes and parameters at Hekla are being studied. The seismic activity is monitored and bedrock strain in boreholes measured, a number of GPS-stations show inflation of the mountain and volcanic gasses are monitored, just to mention the main fields of research, besides basic geological and geophysical studies.

Presently, the inflation overrides the values prior to the eruption in 2000 and small scale earthquake activity has slightly increased. Nothing indicates an imminent eruption however, clear preludes to the latest Hekla eruptions are very short, in the order of only 1-2 hours.

What will happen when Hekla erupts?

There are a number of scenarios to consider. Hekla could erupt in the same manner as it did, for example, in 2000, within a timespan of weeks, but it could take some months or even a few years. It’s thought that in this case, the effects on mainland Europe through the ash plume would almost certainly be negligible.

A longer dormant period, with more magma influx, might delay an eruption for a few decades and this could produce a more powerful eruption with effects hard to forecast. So whilst it’s impossible to predict when exactly the eruption will occur, volcanologists will probably agree that you can never trust a dormant volcano and certainly can never foresee its activity with too much accuracy.

Ari Trausti Guðmundsson is a lecturer and non-fiction writer in the fields of geology, volcanology, astronomy, environmental science and mountaineering, with close to 40 published book titles. In addition, he has published short stories, six collections of poems and four novels. Educated as a geophysicist in Norway and Iceland, Ari Trausti works as a freelance consultant in the fields of geoscience, tourism and environmental issues as well as writing and hosting numerous radio and television programs and documentaries. Ari Trausti is also noted as an avid mountaineer, Arctic traveller and is an international member of the Explorers Club. He contributes to scientific exhibitions, visitors’ centers and museums in Iceland and abroad and received prizes for communication in science in 2007 and 2010. Ari Trausti was also a candidate for the office of the President of Iceland in 2012.

If you’re interested in seeing a volcanic eruption first hand, then register for our volcano hotline to be amongst the first to be notified of future eruptions. With 30 years’ experience in organising holidays to Iceland we’ve sent many clients there to witness several different eruptions as soon as we’ve been advised by our on the ground experts that it’s safe to do so. Sign up at volcanohotline@discover-the-world.co.uk or via our website.

We also offer a range of holidays and excursions exploring Iceland’s volcanic highlights, find out more»