Iceland is known as the ‘Land of Ice and Fire’, defined by its many glaciers and multitude of volcanoes. Erupting from the ocean over 18 million years ago, the island’s terrain has changed little since, scattered with moss-covered lava fields, black sand beaches, and jagged mountainous peaks. The chance to explore Iceland’s volcanoes and discover one of nature’s most powerful and fascinating features has helped to make the country a popular holiday choice for adventurous travellers.

Read on for answers to some of the most pertinent questions about volcanoes in Iceland and the best way you can explore them.

How many volcanoes are there in Iceland?

Iceland boasts the fourth-largest number of volcanoes of any country in the world, with around 130 in total and over 30 volcano systems beneath its surface. Not all of them are active and they are comprised of different types including Strato volcanoes such as Eyjafjallajökull. The individual systems can cover areas of several square kilometres. Iceland’s unique geology is largely due to its location on the Mid Atlantic Ridge which separates the North American and Eurasian tectonic plates. These volatile foundations have bred the conditions for numerous volcanoes to form.

Can you visit volcanoes in Iceland?

Yes. Exploring Iceland’s volcanic landscape is a potent lure for visiting the country. One of its most ubiquitous natural elements, visiting a volcano is to look back at the earth in its infancy. Volcano experiences come in many forms, be that strolling on a lava-sand beach, driving through moss-clad lava fields or hiking to the rim of a spectacular crater, such as Hverfjall in North Iceland. One of the best ways to pack in all these is on a self-drive journeys where you can choose your own pace to explore.

For a more intense experience, you can go deep inside a dormant volcano to explore its inner workings. The ancient magma chamber beneath Thrihnukagigur is at the bottom of a 120m cable lift; your descent takes you through layers of colourful lava-rock walls giving you an unprecedented glimpse of a rarely-seen subterranean world. It’s also the only volcano in the world that visitors can enter.

Most dramatic of all is to witness a live eruption. On average they occur every five years or so, but most are in remote areas that are difficult to access and are restricted for safety reasons. However, some are known as ‘tourist-eruptions’ producing flowing lava that can viewed from safe vantage points. There is currently one such eruption at Fagradalsfjall on the Reykjanes Peninsula in South West Iceland, which is seeing locals flock to view it. 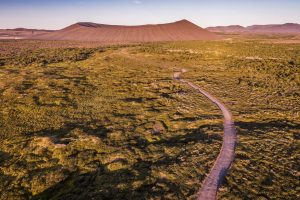 Are there any active volcanoes in Iceland?

There are many active volcanoes in Iceland, the most prolific, and arguably the most famous of which is Hekla in the south west. It has erupted over twenty times since 1104, with the most recent eruption in 2000. Katla (derived from the Icelandic word for kettle) is another well-known active volcano, with an average of two eruptions every 100 years. This volcano is covered by the Mýrdalsjökull glacier, which means that eruptions can be more disruptive causing meltwater and ash clouds. This effective was aptly demonstrated in the infamous Eyjafjallajökull eruption in 2010 that resulted in disruption to air traffic across the northern hemisphere.

Eruptions in Iceland occur roughly every five years. Some last just a couple of days, but some can continue for several months, as is the nature of these unpredictable behemoths. The most recent eruption in Iceland started on 19 March 2021 and is ongoing. A fissure opened up at Fagradalsfjall on the Reykjanes Peninsula releasing flowing lava in a dramatic spectacle. It is not yet known if the eruption will last for days, weeks or even months.

When it comes to dealing with these eruptions, Icelanders are as well prepared as they can be and are well used to dealing with such epic forces of nature. Activity is constantly monitored and responses are efficient and swift.

What is the closest volcano to Reykjavik?

The current live eruption at Fagradalsfjall is just 25km from Reykjavik on the Reykjanes Peninsula. Nearby, Thrihnukagigur is just thirty minutes drive from Iceland’s capital, Reykjavik. This gives visitors the unique opportunity to combine a stay in a vibrant, modern city with an unforgettable encounter with a veritable antique of nature. Choose to build it in as stop on your self-drive holiday or book an excursion ‘Inside the Volcano’ with transfers from Reykjavik.

What type of volcano is Thrihnukagigur?

Thrihnukagigur is a dormant volcano that last erupted over 4000 years ago. Above ground it appears modest rising only 35 metres, but below the surface its vast magma chamber is over 3000 square metres with a depth of 120m. Visiting Thrihnukagigur is a once-in-a-lifetime experience as it’s the only volcano in the world that offers visitors a view inside. The chamber beneath the volcano, which would have once been filled with magma but is now drained, is a gargantuan reminder of the sheer scale of a volcanic system. The chamber itself is tall enough to fit the Statue of Liberty.

What is the biggest volcano in Iceland?

Öræfajökull, in south east Iceland is a Strato volcano and is the tallest volcano in Iceland, with an elevation of 2119m. Its peak is called Hvannadalshnúkur and is a popular summit for experienced hikers. Located on the north western rim of the volcano, Hvannadalshnúkur has some of the most breathtaking views in Iceland. It is physically gruelling and not for the faint of heart, but the payoff is second-to-none.

Coming a close second is Bárðarbunga at 2005m (located under the Vatnajökull glacier) and the third tallest volcano in Iceland is Kverkfjöll at 1920m, which lies on the north-eastern border of Vatnajökull. 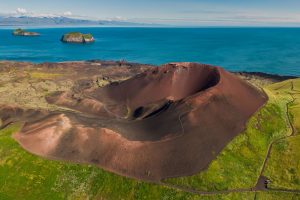 Can you climb a volcano?

Yes, you can climb many of the volcanoes in Iceland and each one offers something a bit different both in terms of difficulty and scenery.

Eldfell, known as Fire Mountain, is a volcano located in Heimaey on the Western Islands. It is a relatively simple climb with some fantastic views. Rust red lava chunks litter the mountain, and in some places, the ground is still warm to the touch – nearly 50 years after its last eruption! This is also the location of the famous Elephant Rock, which has become a much-photographed landmark, created by the power of Eldfell.

Can you see flowing lava in Iceland?

Although Iceland is one of the most geologically active places on earth, it is rare that visitors will have the opportunity to witness newly flowing lava, though it does happen in what are known as ‘tourist-friendly’ eruptions. Fagradalsfjall erupted on 19th March 2021 and is still producing spectacular lava flows being witnessed by locals. The 2010 eruption that brought chaos to international air travel started out as a ‘tourist eruption’ allowing locals and visitors alike the chance to see lava fountains safely providing a humbling experience.

For the majority of travellers, visits to Iceland don’t coincide with such an eruption, but there are a number of museums across the country that give an insight into how volcanoes behave during an eruption. If you are looking to experience the closest thing you can to flowing lava, try the Lava Centre in Hvolsvollur which has an immersive multimedia museum that simulates earthquakes, eruptions and other amazing natural wonders. It is located just off Road 1.

Do you want to see Iceland’s volcanoes for yourself? Take a look at our Iceland holidays for more inspiration, or speak to our team on 01737 214 250.