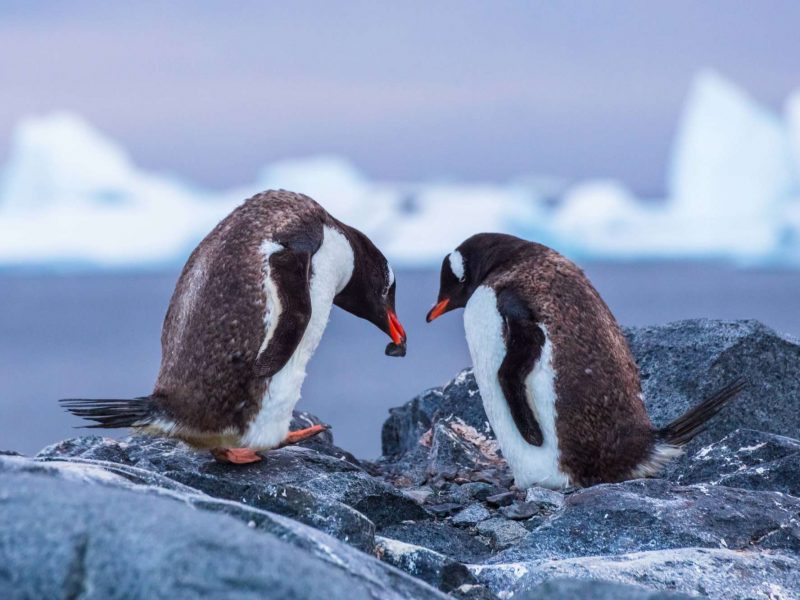 Read 29 facts about these beguiling birds of Antarctica and beyond.

1. Penguins have two days dedicated to them every year: January 20th is Penguin Awareness Day and April 25th is World Penguin Day.

3. Penguins sneeze to get rid of seawater they ingest while hunting for fish – it’s filtered from their bloodstream by the supraorbital gland behind their eyes.

4. Once a year penguins have a ‘catastrophic moult‘ (yes, that’s the technical term) in which they spend two or three weeks on land while they lose and replace all their feathers.

5. Adélie penguins are named after Adélie Land, in turn, named for the wife of French explorer Jules Dumont d’Urville who discovered these penguins in 1840.

6. Macaroni penguins are named after the flamboyantly dressed group of 18th century aristocrats, the ‘Macaronis’.

7. It’s not quite so clear how the Gentoo penguin got its name, but they do live up to their Latin name pygoscelis – brush tailed – as they have the most prominent tail of all penguins, which sweeps side to side as they waddle.

8. Because penguins aren’t usually under threat when they’re on land, wild penguins aren’t particularly afraid of tourists in Antarctica. In fact, if you stay still they’ll probably come and investigate you!

9. Penguins are naturally found almost exclusively in the Southern Hemisphere, the exception is the Galapagos penguin, which is endemic to the Galapagos Islands and is the only penguin species found north of the equator.

10. There’s a king penguin at Edinburgh Zoo that was knighted by the King of Norway in 2008. Sir Nils Olav holds the rank of Colonel-in-Chief in the Norwegian Guard.

11. Emperor penguins are the largest living species of penguin, reaching around 120cm (4ft) but

12. The, now extinct, mega penguin Palaeeudyptes , which lived between 37 and 40 million years ago stood 160cm tall (the average height of a woman in the UK) and, including beak and flippers would have measured 2m.

13. The smallest penguin is the little blue penguin, found in New Zealand and Australia, which is only about 33cm high and 43cm long.

14. Gentoo penguins are the fastest species – they can reach swimming speeds up to 22 mph. Most penguins manage speeds of between 4-7mph

15. Penguins will mate with the same member of the opposite sex season after season.

16. When they’re breeding, penguins are also similarly loyal to their nesting site, often the rookery in which they were born.

17. Emperor penguins incubate a single egg each breeding season. The egg sits on top of their feet under a loose fold of featherless skin which has a concentration of blood vessels to keep the egg warm. Most other penguins build nests of sticks and feathers.

18. Most penguin chicks hatch in late December, making January and February the best time to visit Antarctica if you want to see the young.

19. Penguins have excellent hearing and rely on distinct calls to identify their mates when returning to the crowded breeding grounds.

20. Both penguin parents care for their young for several months until the chicks are strong enough to hunt for food on their own.

21. Penguins don’t have teeth – they have backward-facing fleshy spines that line the inside of their mouths instead, which help them guide fish down their throats.

22. During the summer, a medium-sized penguin will eat about 1kg of fish, squid, crabs, krill and other seafood each day, but in the winter they’ll eat just a third of that.

23. When it comes to choosing a mate, pudgy male penguins, with enough fat storage to survive weeks of incubating eggs without eating, are most desirable.

24. Rather than relying on blubber to stay warm in the cold waters of Antarctica, penguins survive because their feathers trap an insulating layer of warmth next to their skin.

25. It is commonly believed that penguins are black and white for camouflage; from above, their black backs blend into the dark ocean. From below, their white bellies are hidden against the light coming down from the water’s surface. However, this theory doesn’t stand up when penguins are viewed from underwater as likely predators would see them. Therefore other theories for their striking monochrome plumage should be considered including thermoregulation and energy efficiency. The fact is, no-one really knows for sure.

26. An adaptive gland, the preen (or oil) gland produces a waterproofing oil which penguins spread across their feathers to help with insulation and reduce friction when they glide through the water.

27. All but two species of penguins breed in large colonies of up to several thousand birds.

28. According to the Guinness Book of World Records, the largest colony of penguins on earth is found on Zavodovski Island in the South Sandwich Islands (Antarctica) where approximately two million chinstrap penguins breed.

To view these wonderful birds, your most prolific encounters will be on an Antarctic wildlife voyage. Alternatively, if you’re looking for warmer climes, take a look at our Wildlife Encounters trip in New Zealand, Discover Wild Victoria in Australia and see the little penguins on Phillip Island.

from £779
excluding flights
6 nights Year round
Discover the diverse and picturesque landscapes of Victoria from Melbourne, taking in Phillip Island and the Yarra Valley.
Discover more

from £11,409
excluding flights
16-20 nights Oct-Nov
Immerse yourself in the majestic landscapes and wildlife of these two island groups.
Discover more