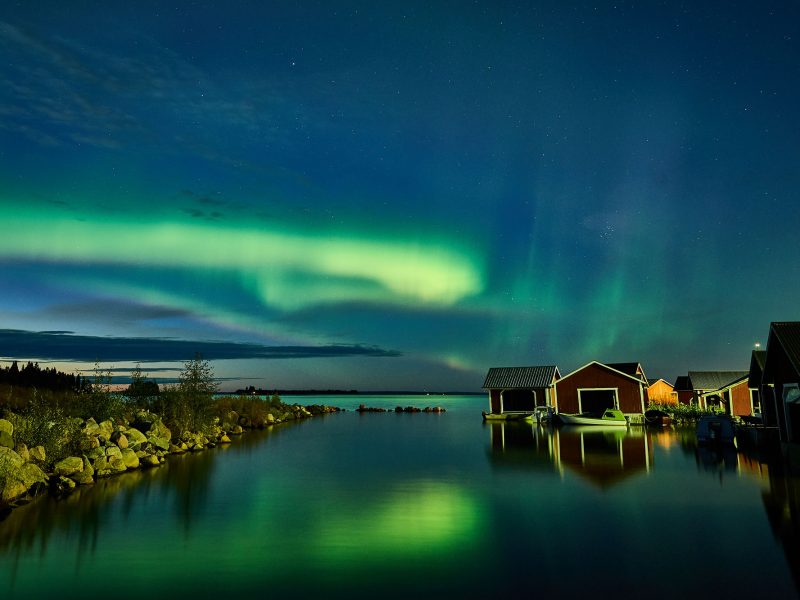 The autumn equinox occurs around the 21-23 September each year marking the official end of summer and beginning of autumn, a time of year known for it’s incredible reds, oranges and yellows. It is also the perfect time for catching glimpses of green!

While the aurora borealis is visible from late August, it is the equinox, which occurs on 22 September in 2021, that gives this cosmic light show an extra boost often producing some of the best northern lights activity. Of course, it’s impossible to predict exactly when the aurora will appear – and if you head into the aurora zone any time between mid to late August and mid-April you chance to experience nature’s greatest light show – but there is something about the time around the equinox that auroras seem to love.

Successful aurora hunting basically boils down to science, timing, location and a spot of luck. The science bit is fiendishly complicated. It involves all kinds of solar shenanigans and molecular mayhem. Apologies if you’re a budding astrophysicist, but let’s sum it up with the following:

Find out more about the science behind the aurora »

As for timing, that’s partly where the autumn equinox comes in – together with its astronomical counterpoint in spring. The northern lights are doing their psychedelic thing year round, but it’s only when the nights get dark enough (from early autumn until the middle of spring) that we can actually see them. According to brainy people at NASA, the equinoxes are also a time when geomagnetic storms – or disturbances in the Earth’s magnetic field – are strongest, and that can lead to bigger, brighter auroras.

But such is the unpredictable nature of the aurora borealis there are still no guarantees that these periods increase your chances over the rest of the season. Providing you have clear skies, any night of the eight months between mid-August and mid-April can suddenly glow green and crimson as delicate strands of the aurora borealis begin flirting with the stars.

It’s worth noting that seasoned aurora hunters are not nocturnal creatures. They don’t cower from daylight or obsess (too much) about solar flare forecasts. A successful aurora adventure places equal emphasis on discovering the natural wonders around you, exploring wilderness trails, heading out whale watching or trying out a host of other activities available in autumn.

Iceland bathes in the limelight when it comes to aurora adventures. Our collection of rural northern lights holidays is based on staying in countryside hotels where the night skies are blissfully big and dark. Choose between self-drive breaks and small-group escorted holidays. Our popular 3-night Aurora Nights is based at stylish Hotel Ranga which offers an aurora wake-up service, a fine-dining restaurant with panoramic views, a state-of-the-art telescope and outdoor hot tubs!

The Lofoten Islands are one of Norway’s best kept secrets in a great location for viewing the aurora. Visit on an autumn self drive and explore inlets and picture-perfect fishing villages against a backdrop of peaked mountains and tranquil fjords. We also offer a range of northern lights holidays in Swedish Lapland, including fabulous wilderness retreats in forests near Lulea and along the shores of the Gulf of Bothnia, which freezes over as winter descends.

You’ll still need a little luck to witness those dancing green lights. But one thing is certain – with such a varied and exciting range of aurora adventures available, you’ll have a lot of fun trying!

It’s impossible to predict exactly when the aurora will appear. However, at Discover the World we’ve spent over 38 years refining the art of the aurora adventure. From Finland to Norway, Sweden to Iceland as well as Canada and Alaska, we have discovered the best places to see this incredible phenomenon and we’re excited to share them with you. Our northern lights holidays are designed to maximise your chances of witnessing this spellbinding phenomenon.

from £881
excluding flights
4 nights Jan-Apr, Oct-Dec
This inclusive short break is based at delightful Brandon Lodge with an array of winter activities to choose from.
Discover more

Lofoten and the Northern Lights

from £720
excluding flights
6 nights Feb-Mar, Oct-Nov
This self drive takes in the superb scenery of one of Norway's best kept secrets in a great location for viewing the aurora.
Discover more

from £1,264
excluding flights
4 nights Sep-Oct
This inclusive break takes you to the Lulea Archipelago in the Bay of Bothnia, where you are never far away from nature staying in a delightful coastal setting
Discover more