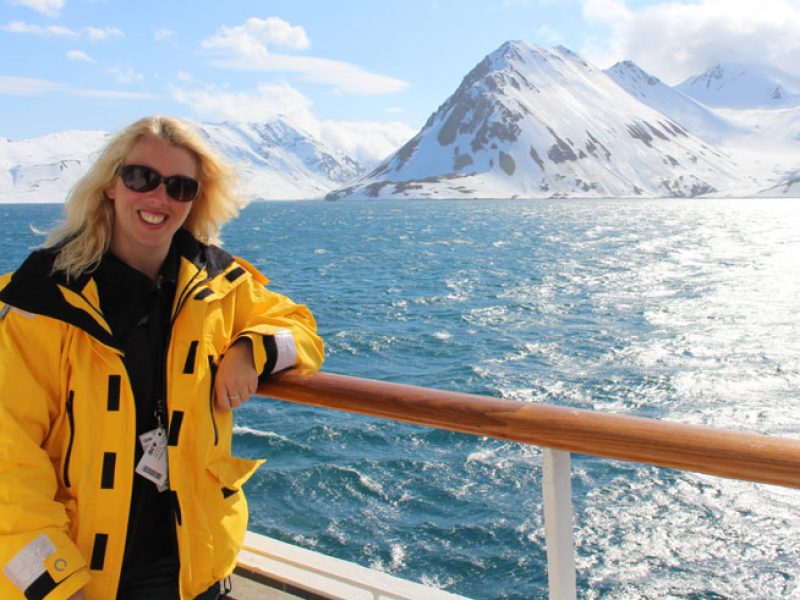 Our Polar Travel Specialist Jo Cooper has visited the Arctic several times, and we asked her to share a few insights for what to expect from a visit to Spitsbergen.

What should I expect to see in different months?

I first went to Spitsbergen 8 years ago in August, and last year I visited in June. There was no midnight sun at that time but we did have some beautiful sunsets. There was hardly any snow on the ground in August, which was the biggest difference with going in June when there was still a lot of (sometimes very deep!) snow.

In both months, however, we saw polar bears, walruses, reindeer and whales. Polar bears were a little easier to find in August as they were mainly down on the beaches searching for food or having a nap. In June, we saw polar bears in the water and on the ice.

I was pleasantly surprised to see a couple of humpbacks right in the front of the ship in June, and we saw fin and minke whales in August. We came across quite a few icebergs in June and some of them were such fascinating shapes. You can easily get mesmerised by them.

Experiencing the midnight sun in Spitsbergen was one of my main highlights. It was a very strange thing to get used to, no matter if it was 9am, 3pm or 1am, it was still bright daylight.

On my second night in Longyearbyen, I decided to go for a walk around 10pm down to the waterfront as I could see the sun sparkling off the water from my hotel room window. It makes you feel like you should be awake all night as you don’t want to miss anything, but of course, the next morning the sun was still as bright as it had been the night before.

The midnight sun is an amazing phenomenon to experience, and it was actually really strange 12 days later being back in the UK and seeing a sunset!

Did you brave the ‘polar plunge’?

When I went to Antarctica a few years ago, I had the opportunity to do the famous ‘polar plunge’ – jumping off the boat into the sea – but decided not to. This time in Spitsbergen, I plucked up the courage to finally do it!

The morning had started out bright and sunny and our captain managed to find a sheltered bay where the water was bright blue and very inviting. I kept trying to decide whether to do it or not and after seeing all of my friends and the expedition team jumping into the water, I decided to run to my cabin and change. This meant I was the last person to do it, and when I was standing there with a rope tied around me about to dive headfirst into the Arctic water, I thought I might have lost my mind! However I am now proud to be part of the Polar Swim Club, with the certificate to prove it

Find out more insights from Jo, or browse our collection of Arctic voyages. To start planning your own polar adventure, you can contact Jo direct, or send us an enquiry .