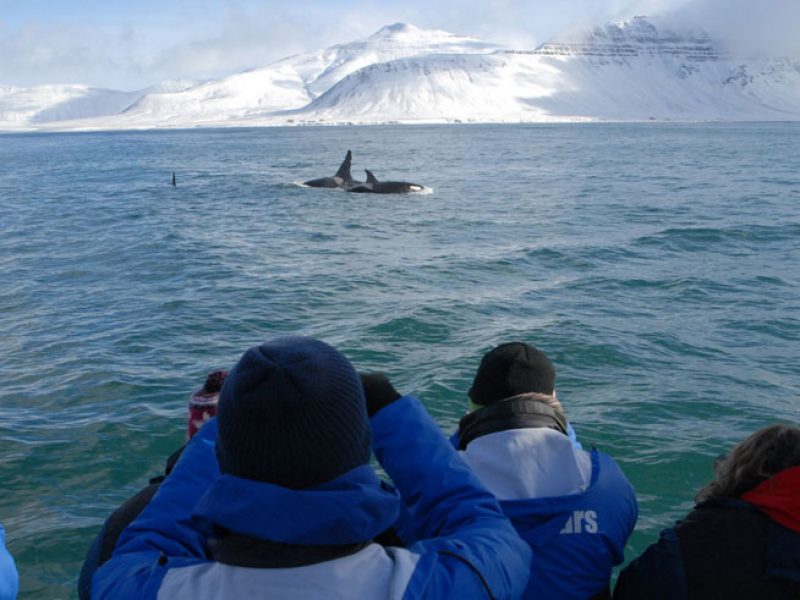 Iceland Specialist, Eric, travelled to Grundarfjordur on the Snaefellsnes Peninsula in Iceland to experience our popular Orcas and Aurora holiday.

After the excitement of arriving into Grundarfjordur on Iceland’s Snaefellsnes peninsula the previous night and seeing the northern lights, everyone was up bright and early for a morning of whale watching.

“I couldn’t believe what I was seeing… the whales were following us home!”

Our guide Alexa met us at the hotel and we were taken to the whale watching centre which was just a couple of minutes away. She explained to us how much wildlife we would see on the boat trip including orcas, seals, birdlife and even dolphins. Alexa was so knowledgeable, and you could really tell that she enjoys the trips too – her enthusiasm made it even more interesting.

After the talk we were taken next door to get ready. We were given a huge waterproof all-in-one suit which kept us very warm with the help of hats, gloves and other warm clothing! We then went to the harbour and joined the captain. We were taken on to the larger boat which had room for around 50 people – there is also a smaller boat suitable for around 20-30 people. As we left the harbour, we were told about the area and given more information about the wildlife we might see while on the trip. The scenery was absolutely stunning; the sun was just rising above the snow-capped fjords and reflecting on to the water. It really was beautiful.

We had been travelling around 45 minutes from Grundarfjordur when the captain suddenly shouted “3 o’clock!” to indicate that there was something to the right of us. His vision was incredible and he had managed to spot a white-beaked dolphin in the distance. The engine was switched off and we stayed to watch the playful dolphin for a while, before heading off to try and find some orcas.

We travelled for a further 30 minutes and what happened next was absolutely amazing. The engine was switched off again as the captain spotted an orca in the distance. As we got closer we realised it wasn’t just one orca, in fact we were absolutely surrounded by them. They were so close!

Everyone on the boat was silent and all you could hear was the splashes of water as the whales came to the surface and then returned underwater. I was amazed that they didn’t seem affected by the presence of the boat and were happy to swim alongside us. We stayed with them for around an hour before heading back to Grundarfjordur. As we turned back we heard a shout of “9 o’clock!” I rushed to the side of the boat and couldn’t believe what I was seeing… the whales were following us home! They stayed with us for around ten minutes before heading off into the distance.

My whale watching experience is something I will never forget, and I would love to go back and do it again. The scenery was stunning, and there was so much wildlife that I would strongly recommend this trip to any wildlife lovers spending time in this area.

Find out more about our ever-popular Orcas and Aurora trip or get in touch with our Iceland Specialists to discuss your plans.

We send our Travel Specialists out to our destinations so you have real experiences to draw on - here's what Doug made of his whale-watching experience on his Orcas & Aurora trip...

One of our clients, Gary Ward, has been fortunate to travel on this trip to Iceland three years running. We caught up with him to find out what makes our Orcas and Aurora trip so special, and whether he would do it again.

Claire Sangster has been on our Orcas & Aurora holiday twice, so for anyone considering an escorted tour, she compares her experiences of travelling in January and March.

Meet cetacean specialist Alexa Kershaw, who has been one of our guides for over 10 years and is one of the leaders of our Orcas & Aurora tour in Iceland.

from £1,247
excluding flights
4 nights Mar
Combine the excitement of seeing orca and the northern lights on this guided short break.

Winter Wildlife and Aurora Self Drive

from £566
excluding flights
5 nights Jan-Mar, Dec
Combine orca and aurora watching with a stay in Reykjavik on this winter self drive holiday
Discover more