The 8 Seasons of the Sami 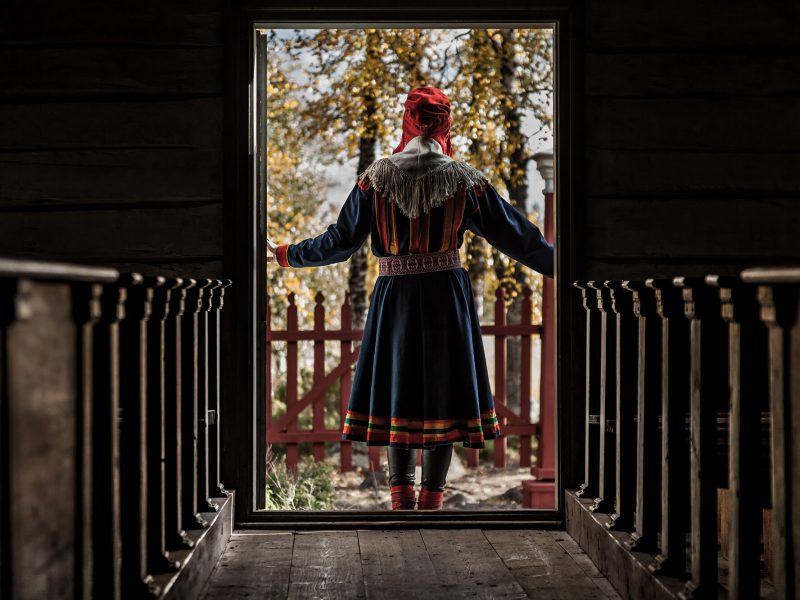 Imagine a year with eight, not four, seasons. Such is the ever-changing light and patterns of nature in Lapland that the indigenous Sami people originally adopted a far more complex calendar than the one we’re used to.

The Sami calendar revolves around reindeer. Although few Sami live by the old nomadic ways, reindeer herding remains deeply entwined in their culture and they still rely on an intimate knowledge of the seasons and climate. For thousands of years, Sami and reindeer have ebbed and flowed between sea, mountain and forest, following seasonal cues to find food and shelter. Read on to learn more about their unique eight-season calendar…

Come winter, or dálvve, the longest of the eight seasons, fir trees bow under the weight of snow and the 24-hour polar night infuses everything with a deep blue, monochromatic glow. Unfazed, the reindeer browse on lichens, while their Sámi guardians – equally well-adapted to the Arctic winter – would traditionally have spent these freezing months huddled in tepee-like lavvu tents, fashioning reindeer-hide clothing, or venturing outside to go ice fishing. An appearance of the aurora borealis would have been treated with great respect – some Sámi still share the shamanistic belief that the lights emanate from the souls of the dead.

Nights remain long and dark, full of the promise of the northern lights, but the gidádálvve season of ‘spring-winter’ also sees the return of light and warmth as the sun reappears after several months of winter. After the dark season, it’s a time for getting outdoors, snowmobiling or cross-country skiing across frozen rivers and through snow-laden forests. The Sámi herdsmen start to move their reindeer from low-lying winter pastures to higher ground. Many of the females will be heavily pregnant. 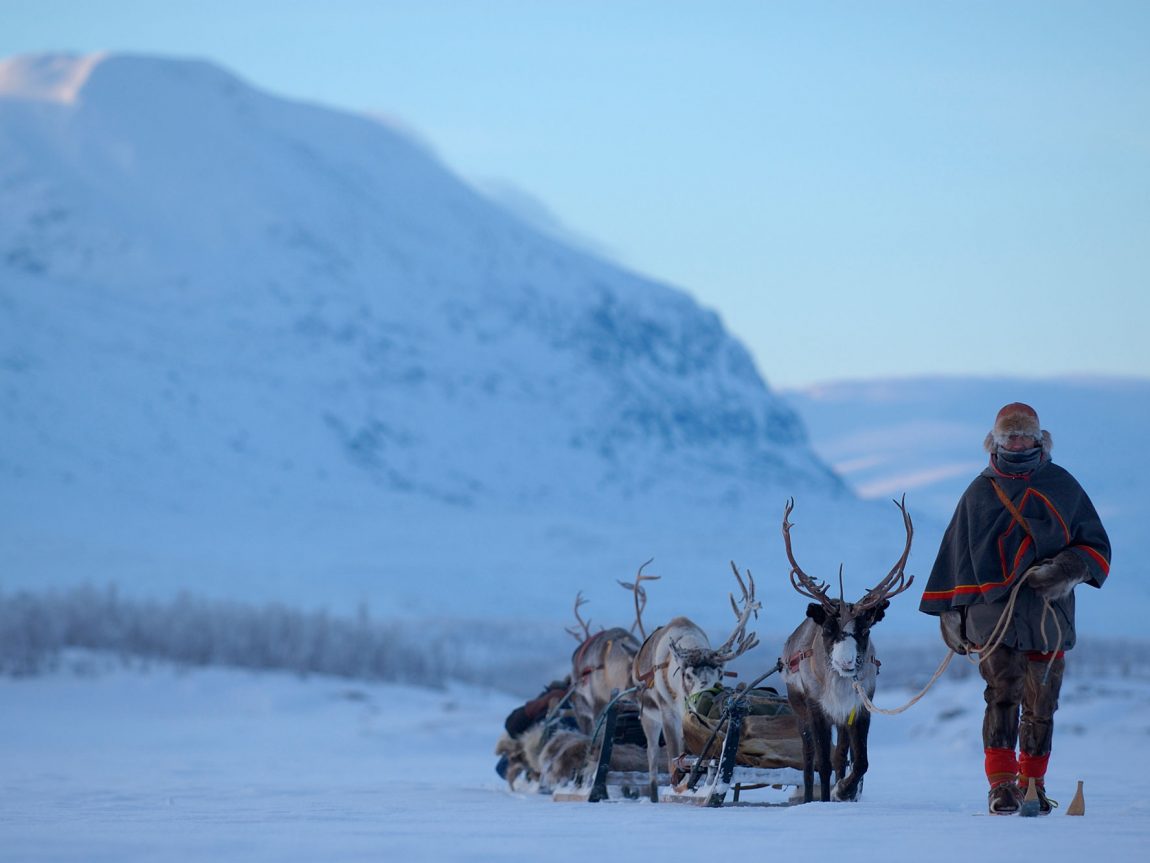 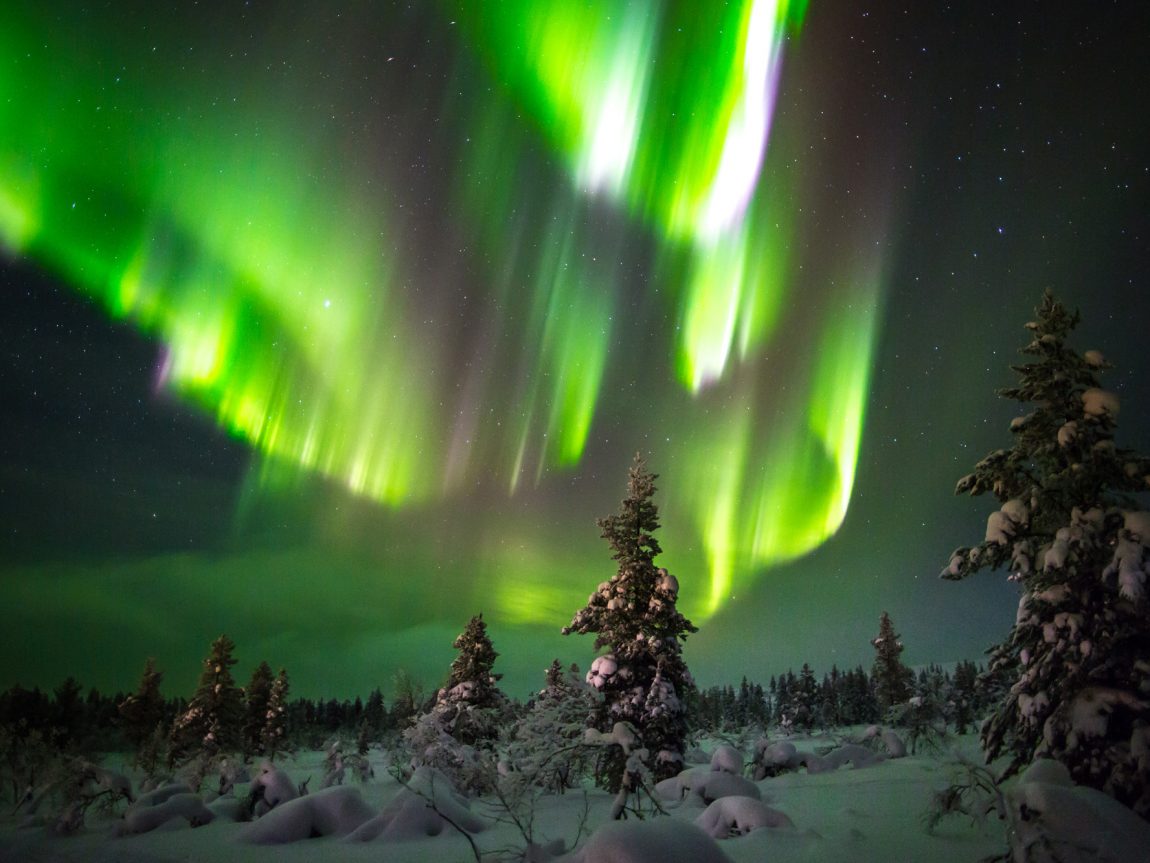 During the spring season of gidá, new-born reindeer take their first unsteady steps as birch forests break out in a flush of green. Snow still lays thick on the fells, but down in the valleys, winter releases its frozen grip on Lapland’s streams and rivers. The sound of rushing water mingles with birdsong; trees start to blossom in sheltered areas, while stoneflies begin to emerge from lakes.

North of the Arctic Circle, there’s constant daylight from May to August, and by the time of the summer solstice (around 21 June) Lapland is bathed in the midnight sun. The endless days of light and warmth trigger an explosion of new life and growth – plants and animals need to make the most of the fleeting Arctic summer to reproduce and raise their young. During gidágiesse (the spring-summer season) the reindeer herds are high in the mountains, grazing on a rich new growth of mosses, herbs, ferns and grasses, as well as the fresh shoots of willow and birch. 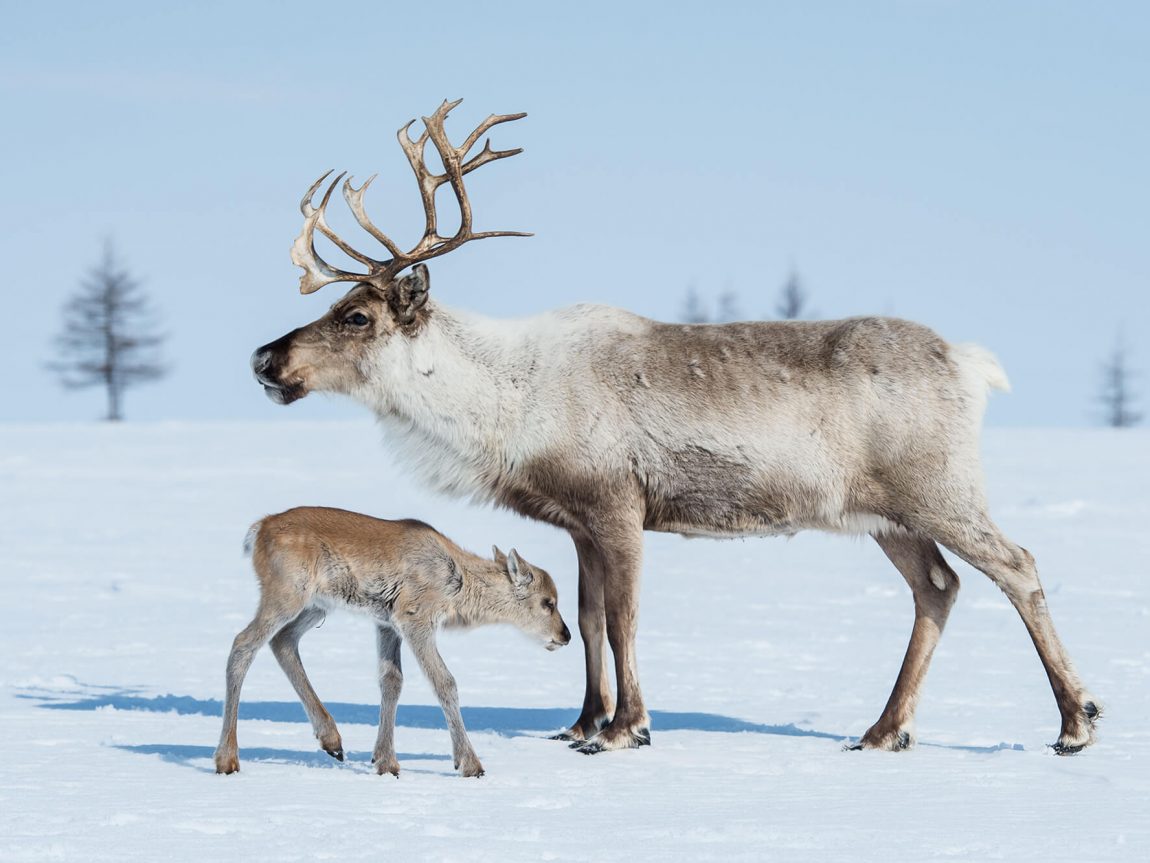 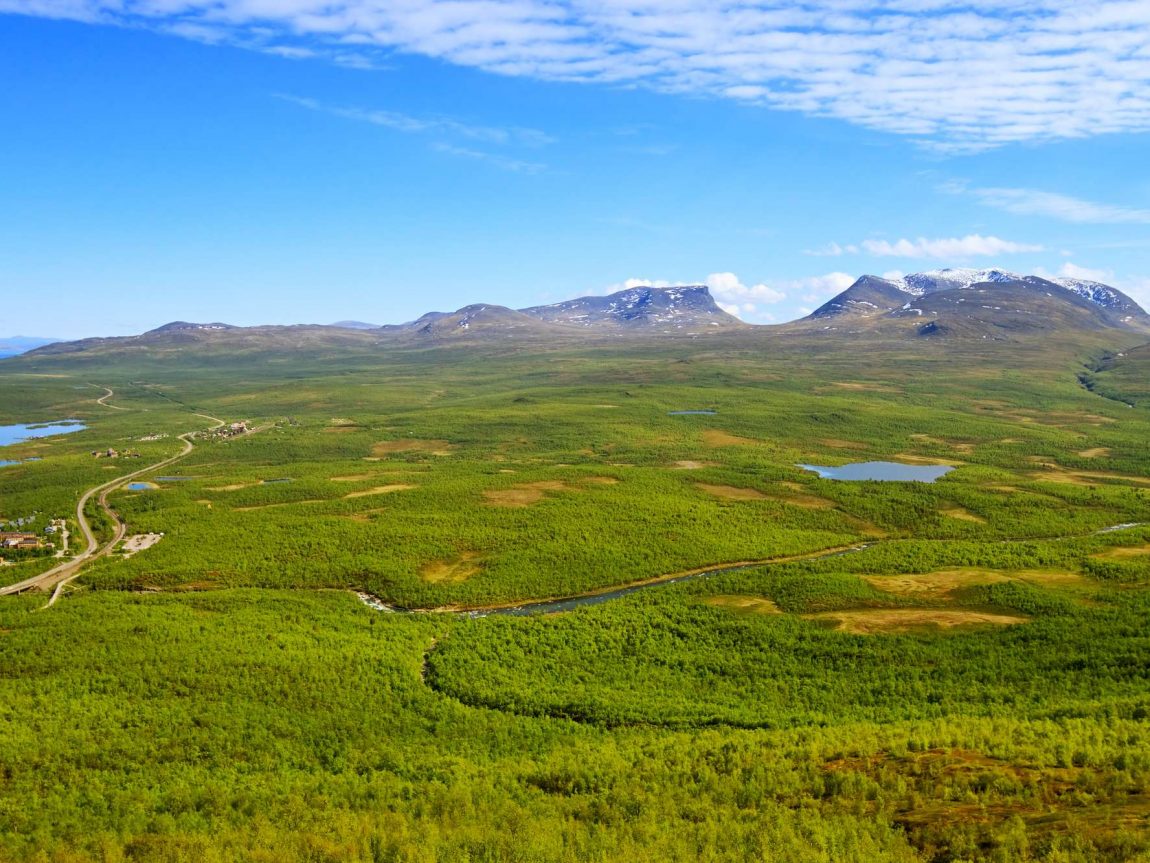 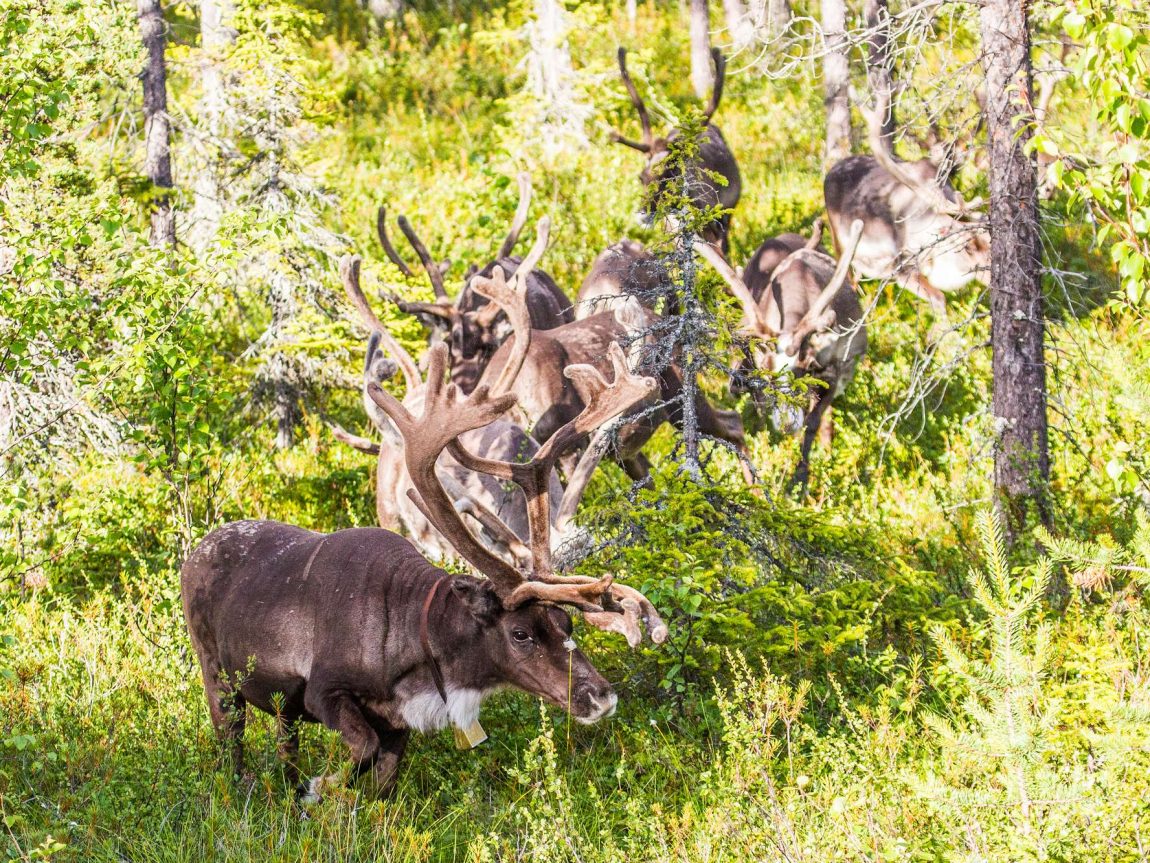 Away from the heat and biting insects in the lowlands, reindeer spend the summer season of giesse roaming the high fells and mountains of Lapland. This is also the season when the Sámi mark their reindeer calves – a family event often held during the cool, light evenings. With endless daylight, it’s also a busy time for fishing and smoking Arctic char and salmon. There’s plenty of time for social gatherings, village festivals and music events – but time is running out for the Arctic flora of the uplands… species like mountain avens, alpine gentian, moss saxifrage and Lapland rosebay must all flower and set seed before the summer is over.

When the tall pink spires of willowherb start to bloom, it is a sign that autumn is drawing nearer. Now’s the time to harvest berries and mushrooms in the great boreal forests of Lapland. Rich in vitamins and antioxidants, bright red lingonberries, black bilberries and the prized amber orbs of the bog-loving cloudberry are sought right across the region. Mushroom foragers scour the woodland floor for ceps, chanterelles and morels; meat and fish are smoked, salted and stored for leaner months. The reindeer are also focussed on food gathering, building up fat reserves that will see them through the winter. 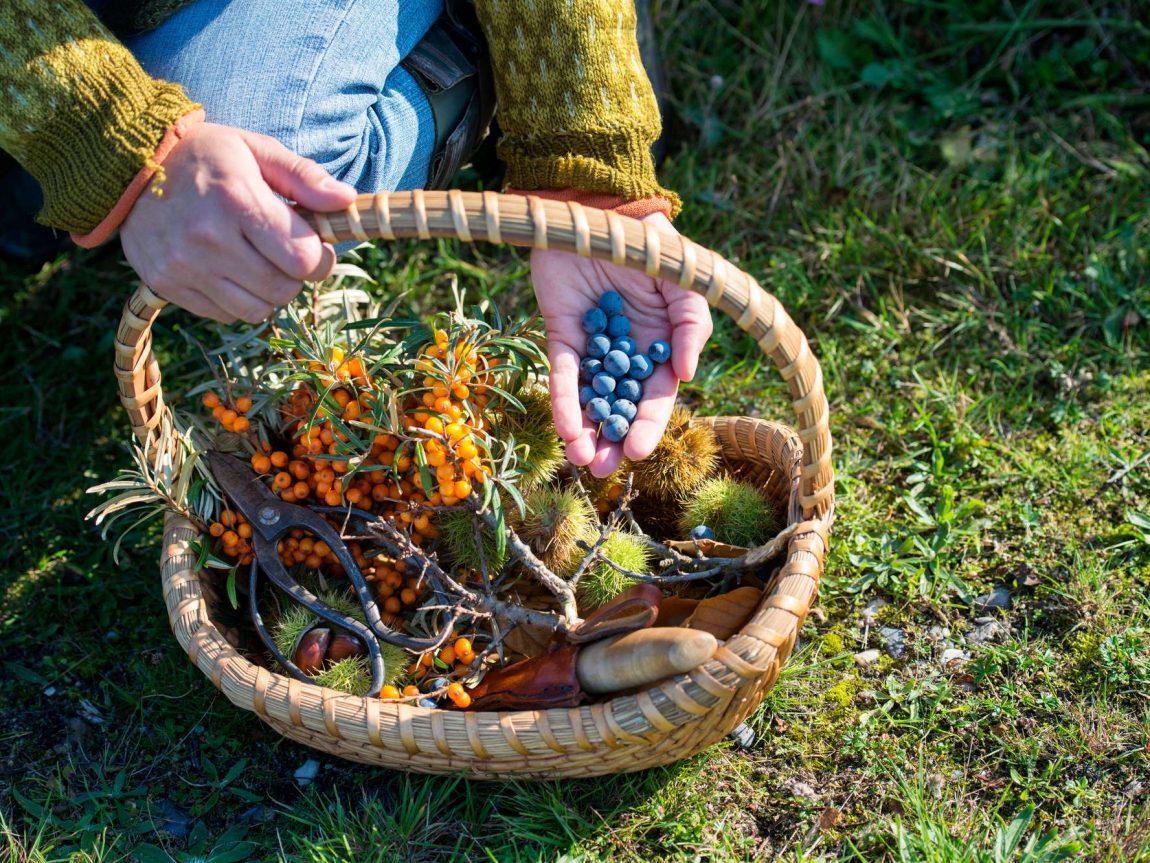 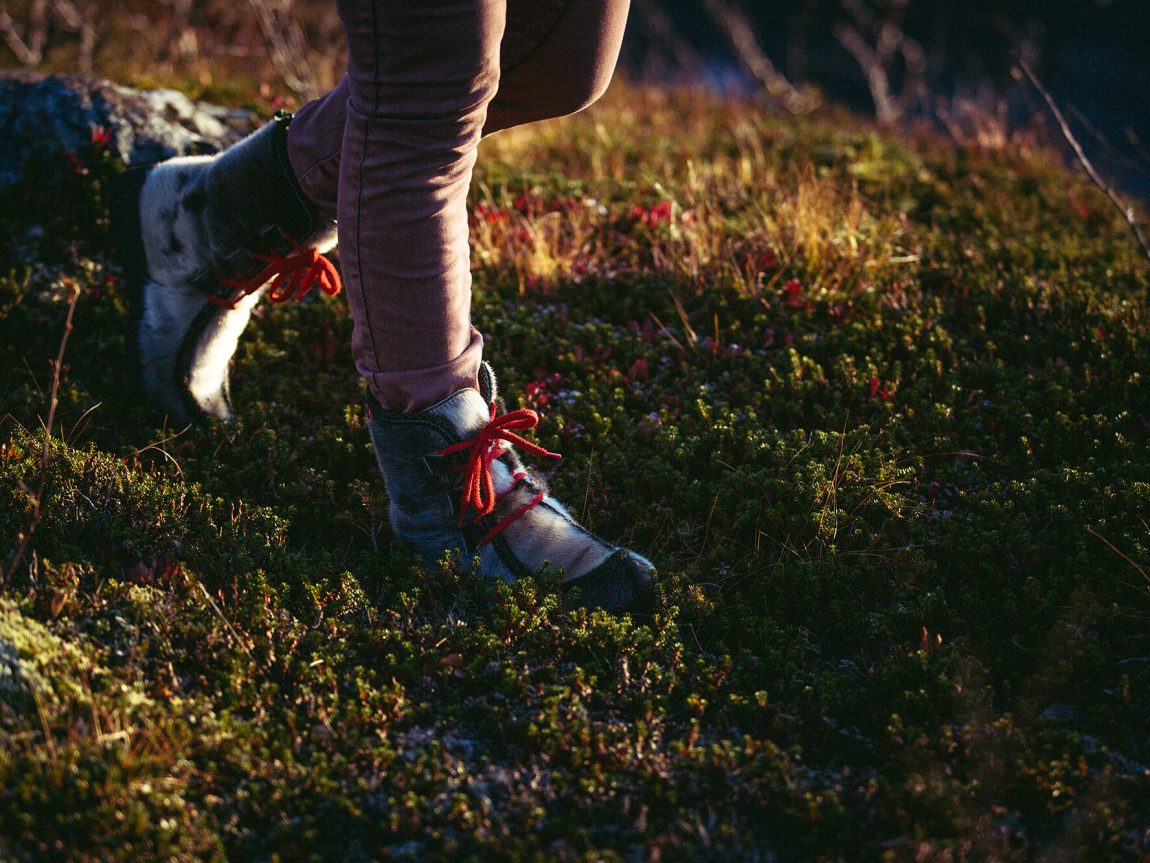 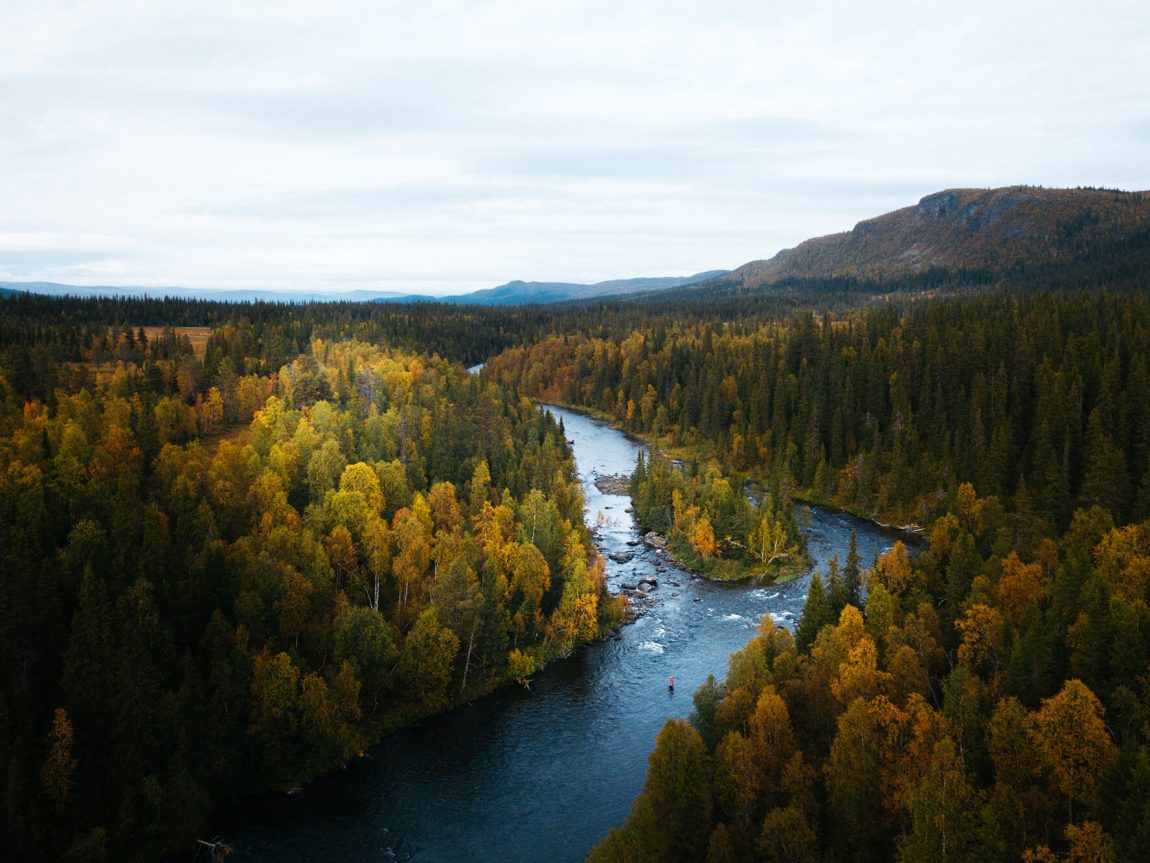 As frosts lace the land in September and October (and the autumn equinox often marks a mesmerising return of the northern lights), the reindeer are herded down to the lower slopes where forests – gilded in scarlet-and-gold autumn finery – provide a stunning backdrop to the annual rut. Supercharged with testosterone, dominant reindeer bulls defend their harems, chasing away rivals and occasionally clashing with their antlers locked. The rut can leave many bulls weak and exhausted, so the Sámi have a long tradition of castrating some of their male reindeer to help them maintain their body weight and condition, increasing their chances of survival over winter. Herdsmen would have relied on these animals’ strength for hauling sleds.

By autumn-winter (the tjaktjadálvve period straddling November and December), the days have grown shorter and snow has cloaked the landscape. Reindeer scrape at scant grasses, sedges and lichens. Some will be slaughtered, the Sámi eating some of the meat fresh and preserving the rest for winter. Hides are treated and fashioned into furs or clothing. The herds are also divided into groups and moved to winter pastures in the sheltered, low-lying forests or along the coast. 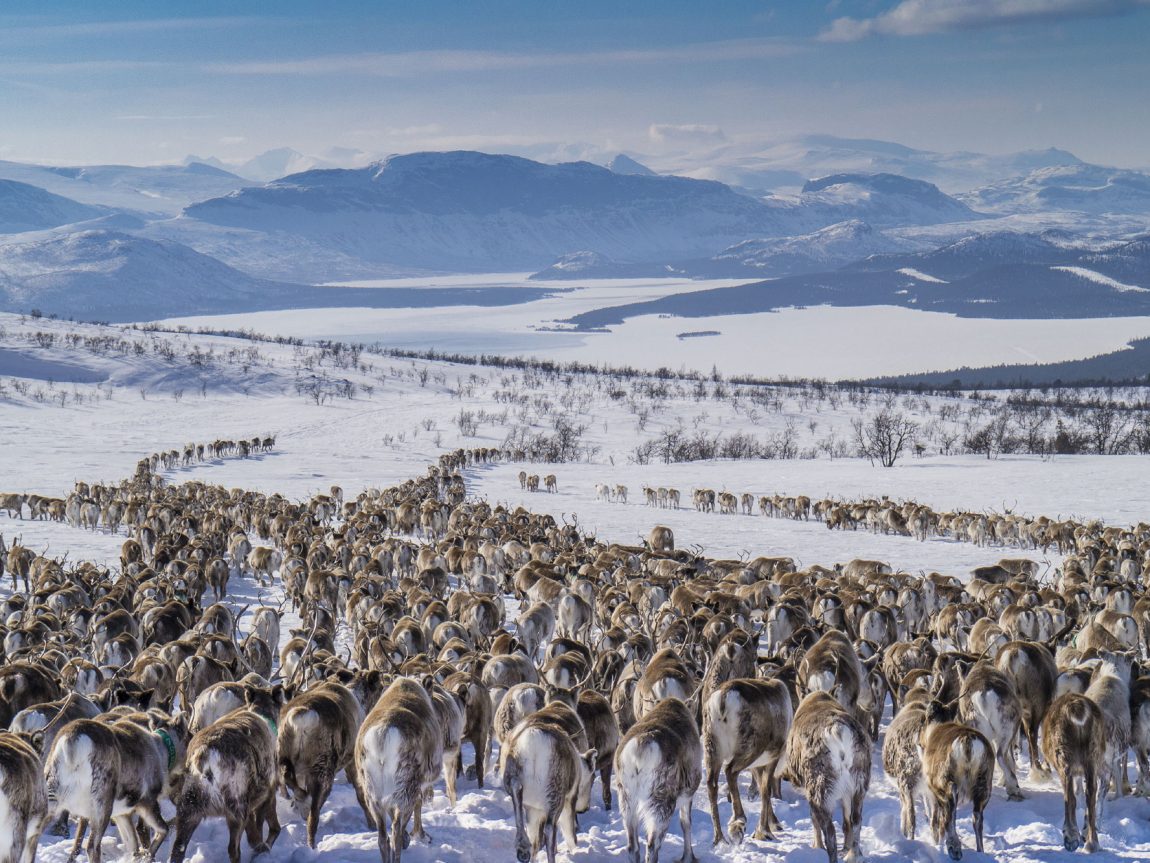 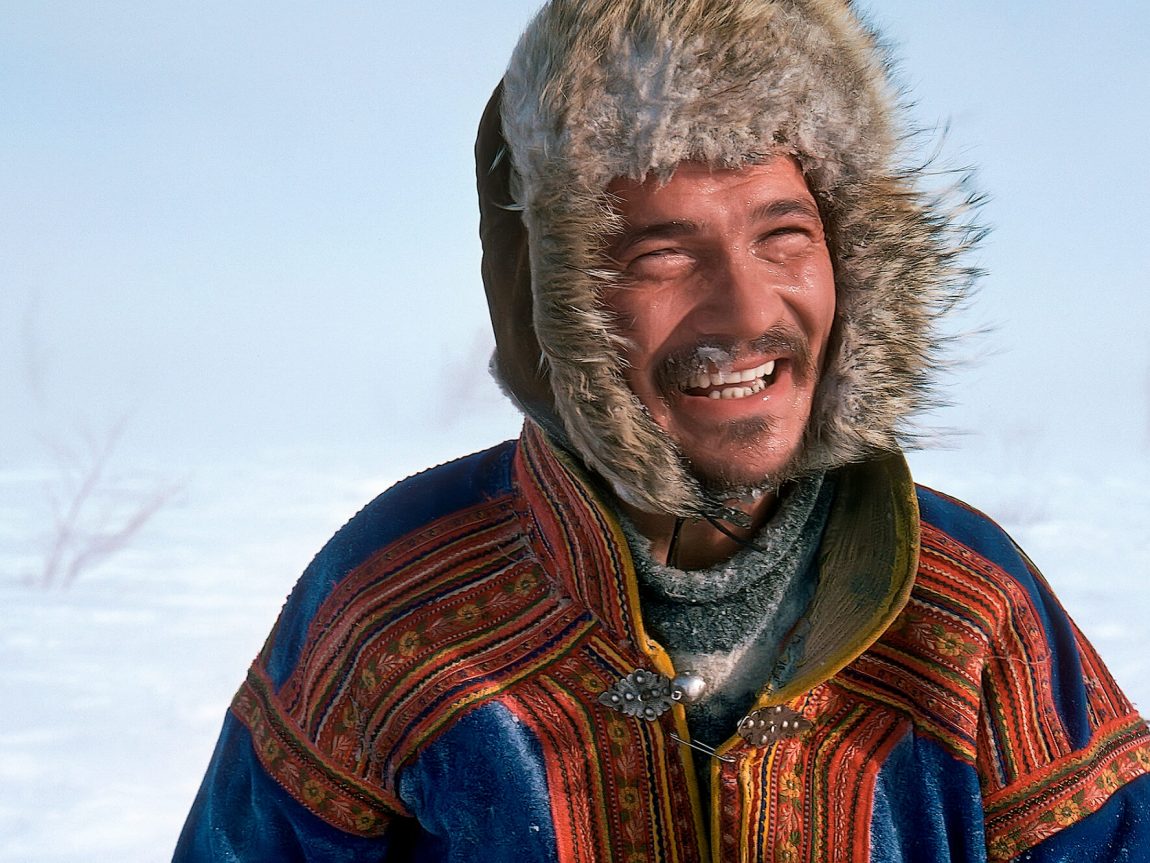 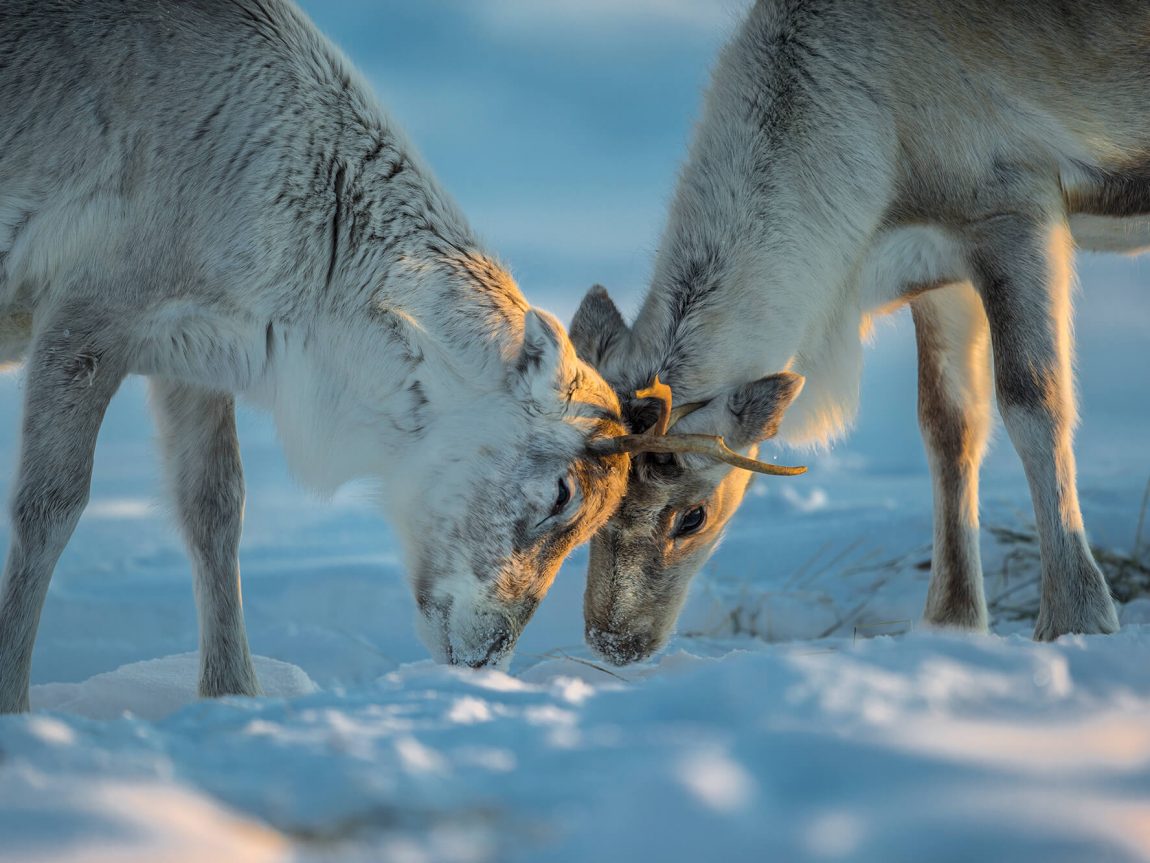 Several of our holidays provide fascinating insights into the Sámi way of life. You can find out about their history (stretching back over 8,000 years), sample a traditional meal, drive a reindeer sled and study their colourful costumes. Talk to our Travel Specialists about Sami experiences at the Icehotel (Sweden), Nellim Wilderness Hotel (Finland) and Malangen Resort (Norway). At Sápmi Nature Camp in Swedish Lapland, we can also arrange for you to go glamping Sámi style, staying in comfortable lavvu tents and learning about Sámi culture from your hosts.