Norway’s North Cape: as far north as you can go 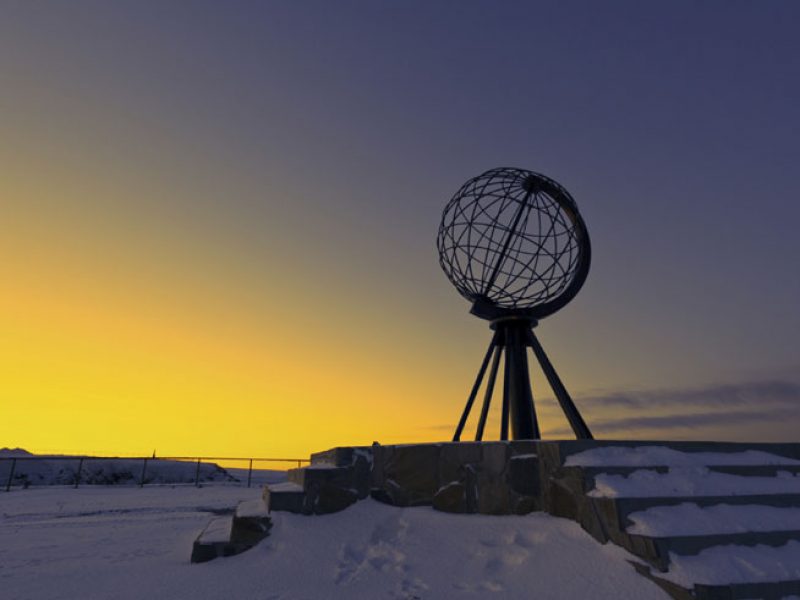 When I knew I was coming to Northern Norway, the trip to Nordkapp or North Cape was the thing I was most excited about.

The cape was named in 1553 by Steven Borough, captain of the Edward Bonaventure during voyage in search of the Northwest Passage. Today, almost 240,000 people a year visit the most northerly point of mainland Europe. Here, you can stand and look out to where the Atlantic and Arctic Oceans meet.

Although the North Cape is accessible year round, you need to join an excursion during winter.

I was picked up from my hotel and taken to the convoy meeting point from where you travel behind a snow plough. Only two snow ploughs go up a day, so if you miss the last return convoy because you’re too busy taking pictures of the scenery, then you will have to stay overnight!

We missed the first convoy up, so we stopped at a quaint little Christmas shop (open all year round) for some gorgeous waffles while we waited for the next one.  The trip up through the mountains is unforgettable. We were very lucky and had fantastic weather, so the jaw-dropping views were even more special.

A little tip: if you are going as part of a group, when you arrive, everyone will choose to start with the panoramic views from the globe and will then look around the visitor centre. If you can resist the urge, I recommend that you walk through the centre first, head for the cinema, and watch the short (twenty minute) film about the history of the North Cape. By the time you have done that, it will be so much quieter around the globe as everyone will have gone in by then. This way you will get some fantastic photos with far fewer people in them.

When I was there, it was so clear that I couldn’t tell where the sea finished and the sky started. I always worry that my photos won’t be a true reflection of what I have just witnessed, but on this occasion, I was delighted with the results.

To read more about the year-round appeal of northern Norway, visit our website here.

Although sightings of the northern lights can of course never be guaranteed, you have a particularly good chance when at the North Cape. Find out more about our Northern Norway Holidays

Our Above the Arctic Circle trip takes in Finnish, Norwegian and Swedish Lapland during the summer, under the midnight sun.

Northern Lights in Tromso and Beyond

Most people tend to visit Svalbard to see the midnight sun or the northern lights, but there is so much more to these icy islands. Here’s some of our favourite facts that may well surprise you about Norway’s far-flung Arctic archipelago…

What is travelling to see the midnight sun like?

Our expert team share their amazing experiences of travelling under 24 hour daylight as well as offering practical tips for planning your own adventure.