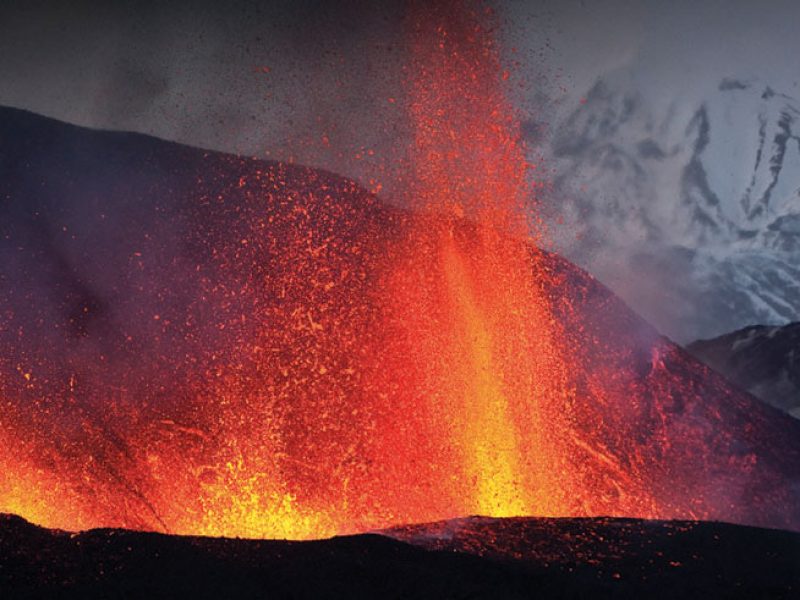 From geysers to volcanic eruptions geological activity in Iceland is not only abundant but sensational. The country owes its very existence to its unique volcanic prone position on the North Atlantic Ridge.

With around 130 volcanic mountains, this geothermal land has all kinds of volcanic activity bubbling away all year round and eruptions are a regular occurrence. When they do occur a volcanic eruption is an amazing spectacle to observe.

Why are volcanoes found in Iceland?

Iceland is a volcanic island sited on the mid oceanic Atlantic Ridge, which is the boundary between the North American and Eurasian plates. Known as a constructive plate margin, new crust continually forms in volcanic activity along the ridge as the plates drift apart at a rate averaging one centimetre per year. Places where the activity is frequent and intense are known as hot spots and one such hot spot lies under Iceland, which explains why it is much larger than many other volcanic islands. Where hot spots occur, the earth’s crust is thin. In Iceland it can be just a few kilometres thick as opposed to 40-60 km thick in much of Europe. Tectonic movements and mounting pressure cause the thin crust to crack, forming swarms of fissures below and at the surface. Magma enters the fissures and when it reaches the surface, it causes a volcanic eruption.

How many volcanoes are there in Iceland?

Within Iceland, volcanic activity in the last 10,000 years has been centred on two active zones, the first running from Reykjanes to the Langjökull icecap and the second from the Westman Islands to the Melrakkaslétta Peninsula in the north east. Outside these main zones are two further areas of activity: the Snaefellsnes Peninsula in the west and the volcanic massif of Oraefajökull, in the south-east of the island.

There are 32 volcanic systems in Iceland, broadly divided into three types:

Strato volcanoes, e.g. Eyjafjallajokull, Oraefajökull, Snaefellsjokull. These are volcanic systems which erupt repeatedly over thousands, even millions of years and build up substantial mountains, topped by a crater. Hekla is a strato volcano, but differs from the others in that it is formed along a ridge.

Fissure swarms and crater rows, e.g. Eldvörp on Reykjanes – these are often associated with central volcanoes. Each volcanic system can be as many as tens of kilometres in length and several kilometres wide.

How often and how long do eruptions last?

On average there is one eruption in Iceland every 5 years but during the last 100 years, eruptions have been more frequent. Most eruptions in Iceland are rather short-lived, lasting only a matter of days or at most a few weeks, but occasionally like that of Surtsey 1963-67, they can last several years. One hundred years of eruptions in Iceland

In the last 10 years there have been three eruptions, Grímsvötn in 2011, Bárðarbunga in 2014 and most recently Fagradalsfjall in 2021.

Why do eruptions produce ash, lava, or both?

Almost all types of volcanic activity found on earth occur in Iceland and the range of volcanic features is extensive and of great interest to study groups as well as general enthusiasts. What’s more, the lack of tree cover and vegetation means that they are easy to recognise and photograph.  As soon as you arrive at Keflavik International Airport you will spot Iceland’s volcanic topography; the drive to Reykjavik takes you through immense lava fields, covered in vibrant moss. Perhaps take a look at our 5-night ‘Volcanic Explorer‘ self-drive itinerary, or contact our team to discuss including your choice of geological highlights to your Iceland holiday.

What is the most common type of eruption?

Fissure eruptions are very common in Iceland and are responsible for most of the crater rows that dot the landscape within the volcanic zone – you can even see them from the plane as you come into land at Keflavík Airport. Rows of cinder or scoria craters form when lava fountains concentrate activity at several vents along a fissure and the material builds up around the vent. Such craters are not usually very high. The longest crater row in Iceland is the Laki crater row where 100 craters are strung out along a 25 km long fissure.

Are there different types of lava

Volcanoes produce acidic (rhyolite) or basic (basalt) rocks and sometimes both types. The acidity is determined by the origin of the magma and its silica content – more than 65% produces acidic rocks, which are typically light in colour, whilst basalt is dark. The best known rhyolite mountains in Iceland are those around Landmannalaugar.

Thin, fast-moving basalt lava is usually low in gas and typically forms shield volcanoes as the flows are layered one on top of another. As the surface hardens, lava continues to flow underneath and the surface becomes wrinkled, forming ropes, giving it the name ropy lava. When the lava cools its surface is quite smooth and easy to walk on. Such lava is called ‘helluhraun’ meaning ‘plate lava’ in Icelandic but the Hawaiian name ‘pahoe-hoe’ is often used. Ropy lava sometimes flows from the crater in submerged channels and when these empty at the end of an eruption, they form lava tubes, also known as lava tunnels. Scoria lava is also basalt but gassy, more viscous and slower flowing and its movement is a bit like earth or rocks being pushed by a bulldozer. The Hawaiian name ‘aa’ is often used, while in Icelandic it is known as ‘apalhraun’. On cooling, the surface is rough, irregular and very difficult to walk over. Acidic or rhyolite lava is rather rare in Iceland and is even more viscous and slow-moving. It cools to a shiny glass-like finish.

Why does new lava differ in look to old lava

Coat the surface giving it a colourful ‘oily’ sheen. As time passes, weathering removes this and the rock become more subdued in colour. At the same time steam rising from the lava allows moss and lichen to begin growing and in time these turn the lava grey.

Where is Iceland's geothermal activity?

Geothermal fields are divided into high and low temperature areas. High temperature areas are found within the volcanic zone and typically produce steam vents and solfataras, while low temperature areas are found in geologically older rocks either side of the volcanic zone and consist mostly of hot springs. Most of Iceland’s domestic heating needs are met by geothermal hot water but the east and south-east of the country are least endowed with this valuable resource. Geothermal activity is usually prolific and intense at eruption sites following the end of an eruption.

Is it dangerous to visit during an eruption?

Volcanic eruptions occur every 4-5 years in Iceland. The Icelanders are therefore amongst the best in the world at successfully living with active volcanoes. In the event of an eruption, their well-rehearsed emergency services have a number of sophisticated, safety management procedures in place and have also recently introduced a warning system to alert all mobile phones within the vicinity of the eruption on the south coast of Iceland. This will be done as a SMS alert in 3 different languages, including English. It is therefore essential that you keep your mobile phone switched on whilst travelling around Iceland.

Generally speaking no but there may be a small area closed off to visitors around the eruption site, depending on what stage the eruption is at and where it takes place. The early stages of the April-May 2010 Eyjafjallajokull eruption were a perfect ‘Tourist Eruption’ in that access to the site was possible and the eruption itself was very beautiful, with spouting magma. Curiously, even when the gas plume from the other craters (resulting from the eruption breaking through the glacier) was at its most productive, 95% of the island, including the entire capital area, was completely unaffected by it. Icelanders have a sophisticated surveillance of seismic and volcanic activity and predictions of the likelihood of an eruption are accurate. 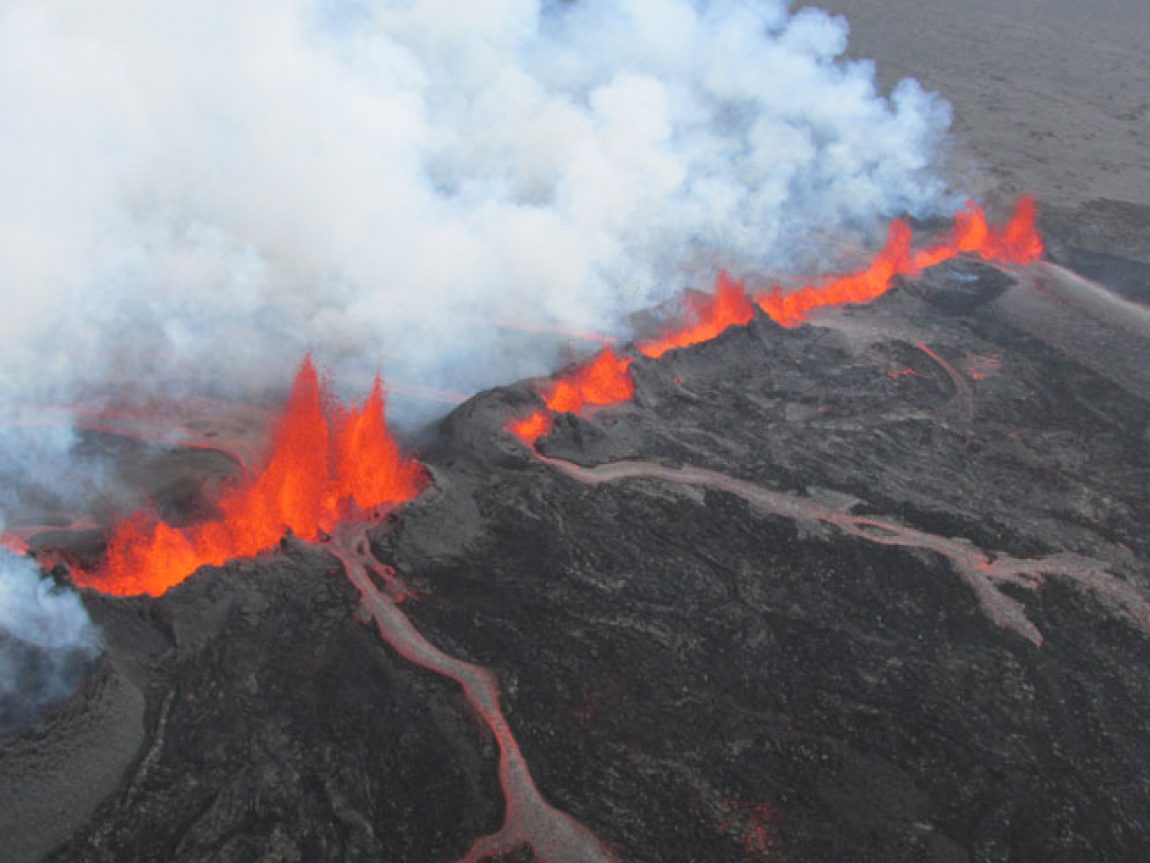 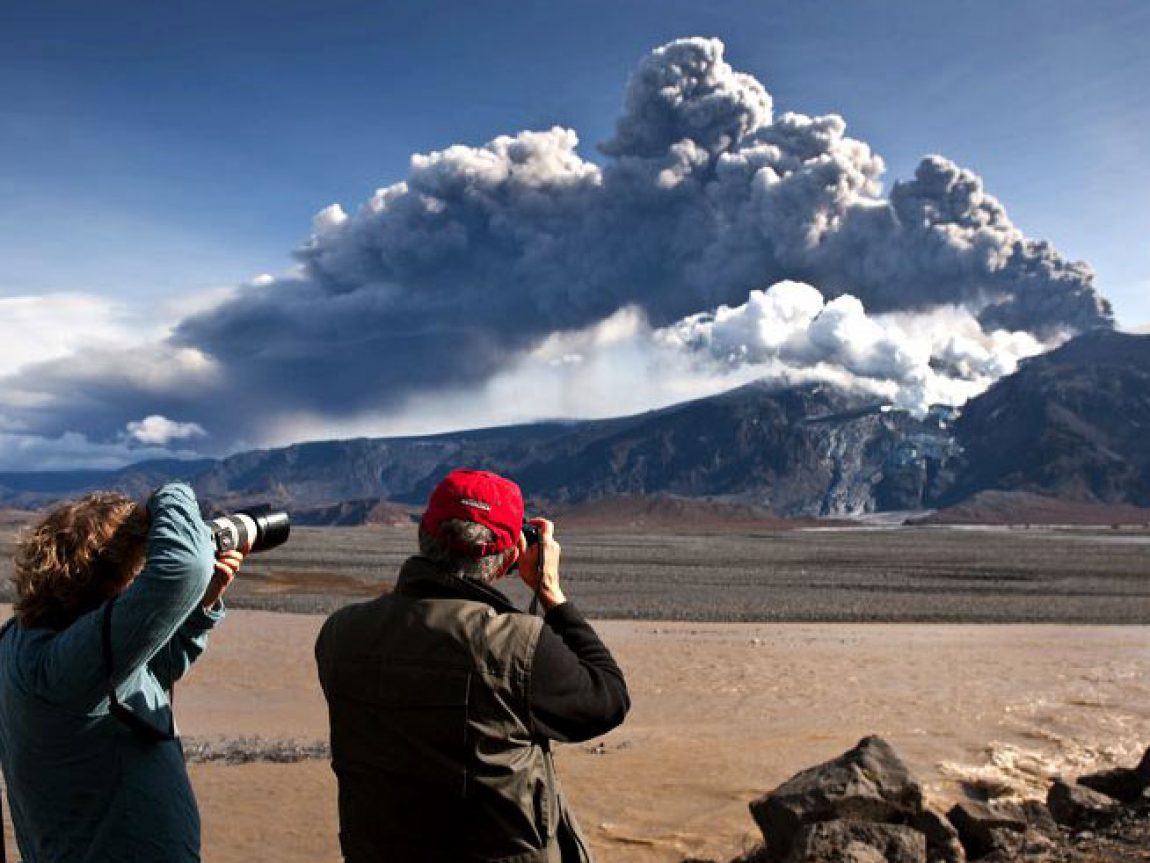 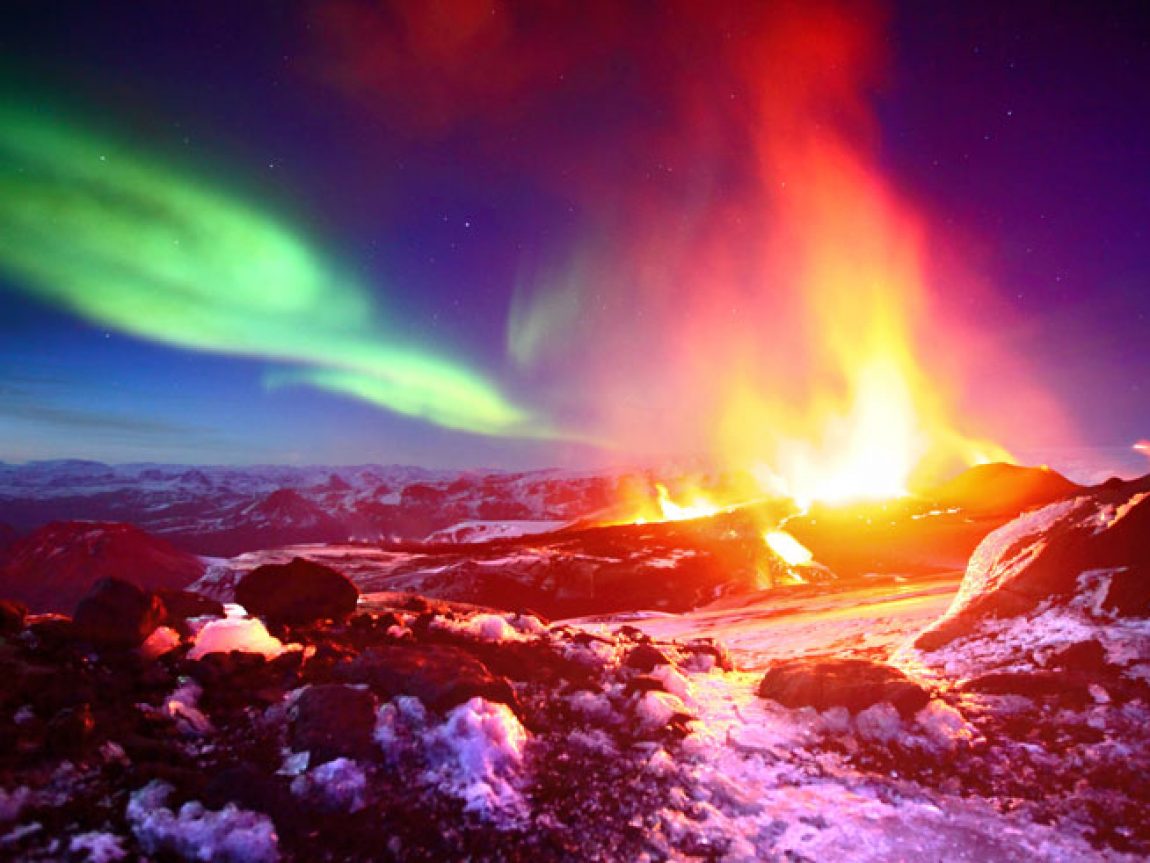 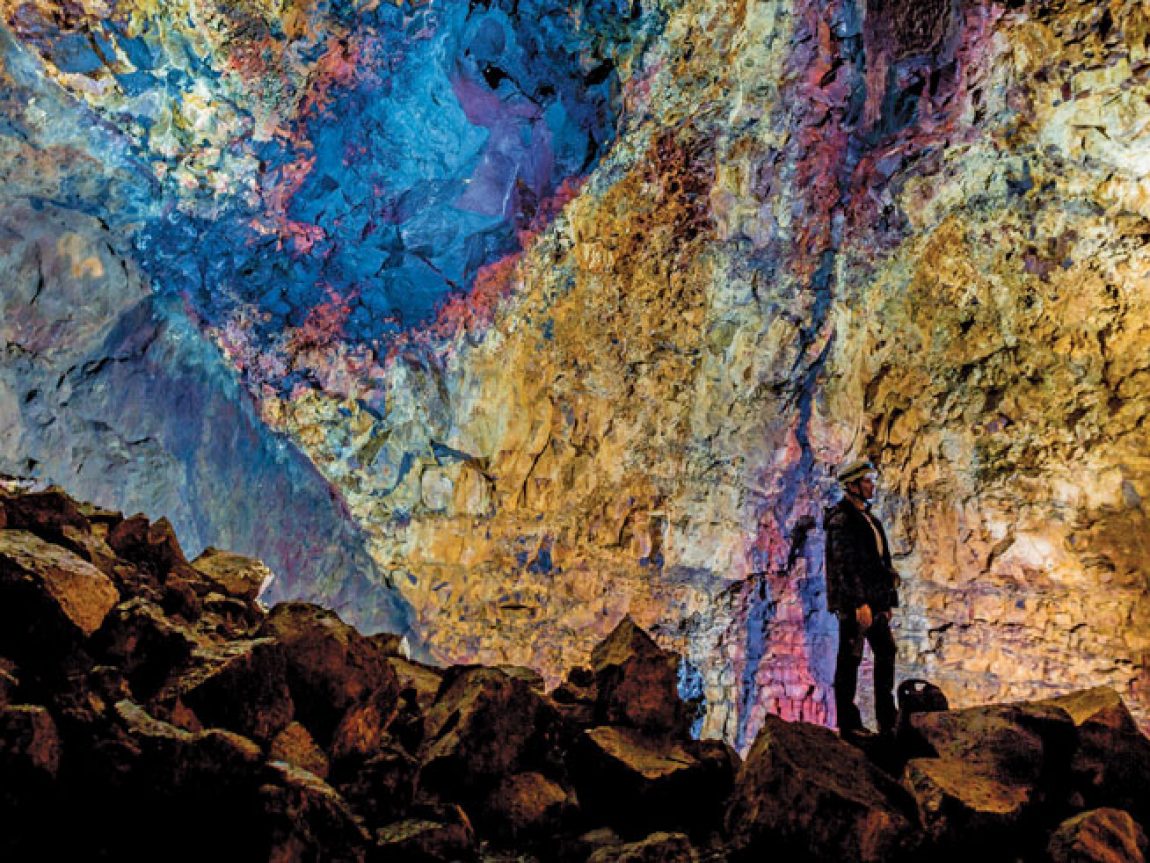 If you’re interested in witnessing a volcanic eruption then register on our volcano hotline to be amongst the first to be notified of future eruptions.

Of course you don’t have to wait for an eruption to explore Iceland’s spectacular volcanic landscapes. From fly drives to small group escorted tours, we have a collection of holidays and excursions that showcase the country’s volcanic highlights.

from £671
excluding flights
5 nights Year round
On this compact yet thrilling self drive, immerse yourself in Iceland's spectacular volcanic landscape