Outstanding wildlife on the Falkland Islands 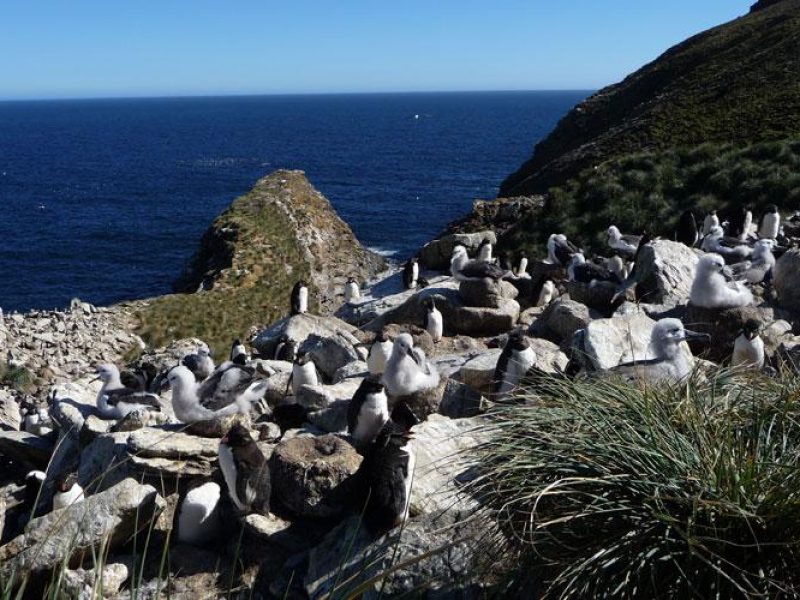 The Falkland Islands are surprisingly beautiful and full of outstanding wildlife experiences, as Nikki, one of our Product Managers, finds out on her long journey home from Antarctica.

“A stiff wind chilled the air, but the sun shone on the natural amphitheatre which was crowded with birds – a sight that I will never forget.”

As an Antarctic enthusiast, I’d come close but had never before visited the Falkland Islands, which are located just 310 miles east of Argentina’s Tierra del Fuego province. Last March that changed when I had the good fortune to visit these beautiful islands, and was simply blown away by the wildlife of the Falklands (this coming from someone who had just spent four months living with penguins, skuas, sheathbills, giant petrels and the odd whale or two on a tiny historic base on the Peninsula!). The Falkland Islands for me were simply surprising in their charm and the variety of birdlife that is so easily observed. After only two days there, it was clear to me that at least a week was needed to even scratch the surface of what the Falklands could offer; exploring the two larger islands (East and West) and around 700 smaller islands.

Many of the visitors’ sites are nature reserves, run by friendly folk who own the island and are passionate about its heritage and preservation. One such place was our first landing site, at Carcass Island in the North West of the archipelago. Falkland Islanders Rob and Lorraine McGill had set out a wonderful spread of cakes and tea, but I was more interested in the flightless steamer ducks, Cobb’s wren, black throated finches and other species that dotted the sandy shoreline. I felt like a child again, wandering the pristine golden beach, finding jellyfish and peering into the rock pools in the sunshine, whilst listening to uninterrupted birdsong.

The Devil’s Nose, on West Point Island, overlooks the sea and is surrounded by cliffs, but that doesn’t seem to bother the agile rockhopper penguins that gather here. I had never seen rockhoppers before; they are smaller than their gentoo cousins and even more daredevil in the heights that they scale! As the surf pounded into the cliffs, they hurled themselves at the shoreline – I was literally standing watching a BBC wildlife documentary. Mingled with the penguins were vast numbers of majestic black browed albatross chicks. Although I hesitate to use the word ‘chick’ as they were just one month away from fledging from their towering nests, and looked to be fully grown, save for some fluff still hanging onto wings and body for dear life! Parents swooped down low over our heads to crash land inelegantly amongst their gangly offspring – several times I felt the air above my head move – they were incredibly close!

For me, one of the absolute highlights was however New Island. A stiff wind chilled the air, but the sun shone on the natural amphitheatre which was crowded with birds – a sight that I will never forget. Black browed albatross and the smaller rockhoppers again nested side by side, with a few predatory skuas circling ahead and even blue eyed shags thrown in for good measure! The noise and smell was all-encompassing, and the air was full of sea birds soaring above. What a truly spectacular sight! The one mile walk from where we landed with the zodiacs gave no hint that such a cluster of wildlife lay just within reach.

I, for one, will most certainly be returning to the Falkland Islands; New Island, West Point and Carcass Island are all on my list again, as well as Saunders, Darwin, Goose Green and Pebble Island – sounds like I’ll need to stay a bit longer than a week – maybe I’ll make it a fortnight!

Start planning your own trip to the Falkland Islands